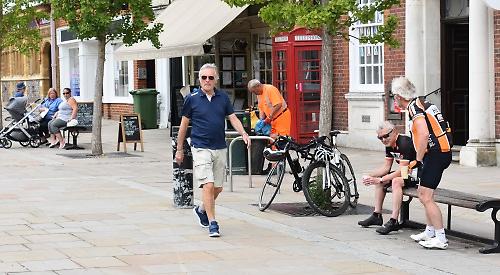 A PLAN to trial the closure of a road in Henley town centre to support retailers is to be investigated further.

Members of the council’s town and committee agreed to consider shutting Market Place once a month despite criticism from some members and traders.

The idea was branded “bonkers” and Deputy Mayor David Eggleton said it would “kill” the town.

Sarah Miller, who chairs the committee, first proposed closing the road from the crossroads to the Greys Road car park entrance, saying it would mean more space for events, such as markets, as well as outdoor space for retailers and hospitality outlets.

Another option would be to close the road in front of the town hall to create more space.

Councillor Miller told last week’s virtual meeting of the committee: “I know lots of people are getting all flappy and thinking it’s going to be a nightmare and the traffic’s going to be awful. but I would just like to say if we don’t try anything then nothing will move on and we will just be the same old Henley.

“The high streets before the virus were dying and I think that, as a town, whether it’s closing roads or whatever, we need to start thinking a little bit outside the box.

“Ways that we can facilitate the retailers, the restaurants and the pubs that don’t have gardens and make it a really exciting place to visit, to have a heart of the town which is buzzing and exciting.

“I would never want to hurt the retailers but I don’t see how this would. The only issue I see would be the traffic but it’s only once a month.

“This could be absolutely amazing and I don’t understand why we can’t just try it. If it’s not good, we will revert to normal Henley.”

Councillor Will Hamilton said retailers and businesses had told him it would “stupid” to close Market Place.

“At the moment it would be bonkers,” he said. “While we have traffic going up White Hill on a Sunday morning backing up to the top of the hill we can’t afford to close any roads.”

Market Place is currently closed on Remembrance Sunday and for the Christmas Festival,

But Cllr Hamilton said: “I really do not think we should be closing that road at any point, for any event, apart from the two we already do. We’d just cause absolute carnage.”

Councillor Eggleton said: “I’m not in agreement with closing any roads because you only have to have an incident and then the whole of Henley becomes gridlocked. I believe the Market Place works as it is.

“I don’t think it needs to be closed anymore. If you stop the traffic from coming in you will kill the town.”

Councillor Lorraine Hillier, who owns the Hot Gossip coffee shop in Reading Road, said the idea was met with “a lot of opposition” at a recent meeting of retailers.

“I think you’re in danger of making Henley market place-centric again,” she said. “There are lots of restaurants and pubs outside the market place that actually have no outside space. It’s a natural gathering place anyway because of markets.”

Councillor Glen Lambert said that some years ago the bottom of Greys Road was closed between the junction with Reading Road and Duke Street and the Greys Road car park.

He said: “Everyone predicted it would be an absolute disaster in the mornings and the traffic would back way up but when it actually happened the traffic naturally redistributed itself.

“I live on Greys Road and I found it much better for getting in and out of Henley than it was before.

“You don’t actually know exactly what’s going to happen until you try it and I think there’s no harm in trying these things every now and again. It would be irresponsible of us as a council if we weren’t open to new ideas. When we talk about closing a road to pedestrianise a wider area, what we’re doing is prioritising people who are in the town, enjoying it and spending money over people driving through.

“I think it’s okay to have that trade off every now and again.”

Councillor Michelle Thomas said that in the months since the lockdown people had enjoyed the lower traffic levels.

“It will be so polluted in Henley when it does go back to normal and I would welcome having less traffic in town,” she said.

She encouraged residents to leave their cars at home if they lived within a mile of the town centre, adding: “You have got people doing very, very short journeys and it is not necessary. Please use your legs and your feet.”

Councillor Ian Reissmann said: “If you make an effort to experiment and it works, that’s great. If it doesn’t work we have one day where there’s perhaps some minor disruption and then perhaps we can think again.

“But considering a creative, innovative idea as part of a whole range of plans makes obvious sense to me and I can’t understand why we’re not at least investigating the possibility of a trial.”

The committee voted by six votes to two in favour of investigating the idea further.