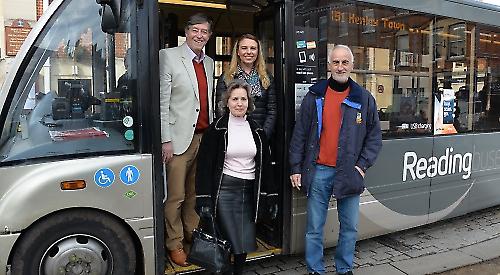 HENLEY’S bus service will be revived next month.

The town council has appointed a new operator but is not revealing the company’s name until the contract has been finalised.

The 151, 152 and 153 routes will return with an added stop at the Highlands Park development, off Greys Road, but the bus will only operate on three days rather than the six previously.

The service will run from 9am to 2pm from Tuesday to Thursday rather than Monday to Saturday.

The non-profit service will be supported by contributions from developers building new homes, government infrastructure funding and concessionary fares income.

Town councillor Stefan Gawrysiak said that in light of the coronavirus pandemic, re-introducing the six-day service was not economically viable.

He said: “We have been through a new tendering process and the price for a full six-day service is prohibitive even when taking into account developer contributions.

“We have to be extremely careful with the finances going into this while bearing in mind that the main users of the bus are the vulnerable members of our community. We recognise that it is vital for the community.

“The reason we went for Tuesday to Thursday is because it is the middle of the week and includes market day.

“We will have a 19-seater bus but we will probably only allow 12 to 14 people on it at one time due to the need for social distancing.”

He said that if the new service proved successful the council would consider expanding the service.

Councillor Gawrysiak said: “We can’t run the risk of running an expensive service six days a week if there isn’t the patronage.

“The idea is we run it for a short period and if we get the footfall or passenger numbers then we could expand it again.

“Because of the developer money, as well as the subsidy from the concessionary fares, at the moment there will be no funding contribution from the council but if we expand the service the council may have to, if it is minded to, part-fund it like it has in the past.”

Reading Buses had been running the service with a gas-powered bus since taking over from Whites Coaches in August 2016 but ended the partnership after a fall in passenger numbers.

The service was temporarily suspended on April 2 due to the coronavirus and the contract with the bus company ended exactly a week later.