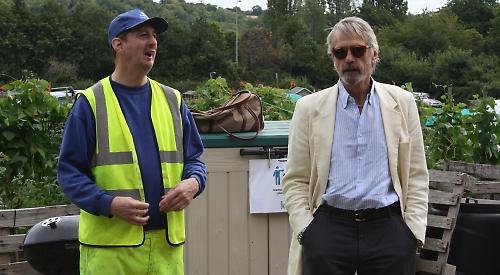 About 20 people attended the event at Waterman’s allotments, off Reading Road. It was organised by Autism at Kingwood, which has a 10-pole plot with 30 different plants and vegetables growing at the site.

Guests included the charity’s founder Dame Stephanie Shirley, Henley MP John Howell and staff from the charity, among others.

Also present was Ben Mills, a beneficiary, who spoke to the film star about the allotment.

Kate Allen, chief executive of Autism at Kingwood, explained how the charity would use its plot to provide therapy for some of the 130 adults with autism that it supports across the Thames Valley.

Irons cut a ribbon to launch the project but had to switch from a pair of shears, which were not sharp enough, to a pair of scissors.

He then spoke about the importance of gardening and his role as patron of the charity.

“As a long-standing patron for Autism at Kingwood, I know how hard they work to provide real added value to the lives of autistic adults.

“This allotment is an opportunity to have quiet, meaningful occupation in a safe place.

“I’m a believer that being outside gardening, creating flowers and seeing the bees, birds and so on is so important for our mental, physical and emotional health.

“For people who have barriers that prevent them from having a normal life, this is tremendous.

“I think it’s essential because the council is able to house people and look after them but not give them those extras, which we take for granted, and which make their lives special and happier and that’s what Kingwood does. It’s immensely important work.”

Irons, who lives in Watlington, was presented with a goodie bag containing beans, potatoes, sweets and an information brochure about the charity.

He said: “I’m a terrible patron because I’m never here and always away but it’s lovely to be able to come down and do something useful for a change and to catch up with old friends and meet some new ones.”

Mrs Allen explained how effective gardening could be for autistic people.

She said: “The positive effects of green spaces and horticulture on human wellbeing has been evidenced in numerous research studies and Autism at Kingwood has a successful history of supporting autistic adults and young people to enjoy and benefit from horticulture experiences.

“I can’t tell how you how valuable it is — it’s immensely important. Just being out in an environment where you’re in touch with nature is great.

“But it’s not just about leisure activities. It’s also about exercise, which is invaluable for every human being, but particularly autistic adults.

“It also helps their self-esteem, which comes from growing flowers and veg. The satisfaction someone gets from eating a meal they helped to create by growing the ingredients is enormous.”

Mrs Allen thanked the Anthony (Tony) Lane Foundation, which was set up in memory of the former town mayor, for providing the tools and seeds for the plot and Henley Rotary Club, which paid for a polytunnel.

A garden co-ordinator, who will lead the project, is being funded by the Sobell Foundation, a charitable trust.

Mr Howell praised the work of the charity and the benefits of gardening.

He said: “I’m very pleased to be here. Throughout my career I have focused on autism and it’s very good to see this facility here.

“There’s something about gardening that’s very therapeutic for us all but particularly for those with autism.

“I think Kingwood should be congratulated in taking this foward and providing this sort of opportunity.”

Dame Stephanie, of Phyllis Court Drive, Henley, said: “I’m so very proud of Kingwood, which I founded in 1994 to support my autistic son Giles, taking him out of an institutional environment and into a house in the village of Kingwood Common, just outside Henley.

“I am delighted to see the launch of this allotment project in Henley. People will be able to enjoy a peaceful environment while learning skills and enjoying the fruits of their labour — quite literally.”

She said it was important that every autistic person who is supported by the charity should have a normal life. “Why they should have restrictions on their lives, I can’t believe,” she added. The gardening co-ordinator is Caroline Powell, of Singers Close, Henley, who is an occupational therapist with experience in the NHS and social services.

She said: “This is enabling people to achieve their goals and work towards whatever is important for them. I want to engage more people to use the space, both adults and children.

“I’m excited to be running both the group and individual work and if we have new people who really need space all to themselves because social anxiety is a problem, then I can provide it.

“The allotment community has been really wonderful and there are some really nice neighbours who have been very generous with their advice and produce.”