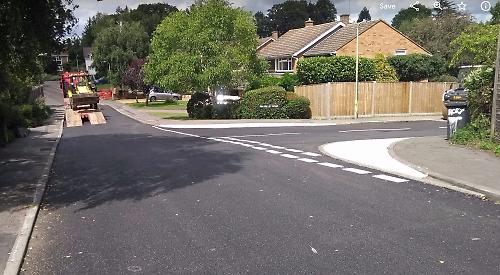 A FORMER Henley mayor claims the pavement in his street was damaged when the road was being resurfaced.

Martin Akehurst has called on Oxfordshire County Council, the highways authority, to repair the kerbstones in Two Tree Hill that he says were dislodged by a large resurfacing vehicle that was left on the pavement overnight.

Council workmen were resurfacing Elizabeth Road and the top of Valley Road at the end of last month.

Mr Akehurst, who has lived in the cul-de-sac off Elizabeth Road with his wife Glynis for 36 years, said: “They have done as much damage here in 24 hours as they have repaired over the past two weeks. It is only a small cul-de-sac and I saw this great big tarmacking machine. It was taking up half of the road and as they parked it on the pavement they destroyed all the kerbstones.

“We had Zzoomm laying cables here about three months back and they carefully put back all the kerbstones and we thought ‘great’ because they had been out of place for years and now they have been ruined.”

Mr Akehurst, who served as mayor in 2014/15 and retired from the town council in 2017, continued: “The vehicle was about 20 yards from our driveway but they’ve effectively destroyed one half of the road.

“The problem is they are classic kerbstones, not the current moulded concrete ones, and Two Tree Hill hasn’t had any work done on it for more than 30 years.

“I don’t think it has ever been resurfaced in the time we’ve lived here. I would like the council to come out and fix the kerbstones.

“The road itself is used quite a bit and I do think there is an issue with road safety there having dodgy kerbstones.

“It is a very popular route for dog walkers and Henley college students.” Councillor Stefan Gawrysiak, who represents Henley on the county council, said the damage was not caused by the resurfacing machine.

He said: “As soon as this report was put online, I got on my bike and videoed the alleged damage and I came to the conclusion that the road machines had not done it.

“You can clearly see the cobbles with grass growing out of them. This is clearly historic damage.

“I agree with Mr Akehurst that it should be repaired and I have asked the officers to carry out repairs but when that will happen I don’t know.”