Fury at office to flats conversion 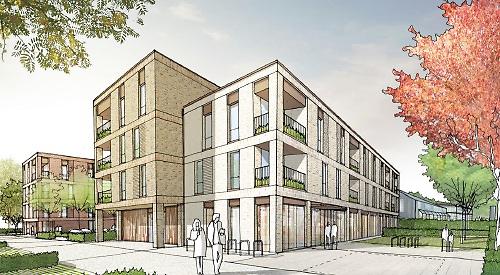 THE approval of plans to build 43 flats on the site of a Henley office block has made a mockery of neighbourhood plans, say town councillors.

Chaskel Rand and Joel Sofer, from London, have been granted planning permission to demolish two-storey Andersen House in Newtown Road and build two blocks of flats.

Each block would be up to four storeys with 221 sq m of commercial space to address concerns about the loss of employment land.

The application was approved by the planning committee of South Oxfordshire District Council, the planning authority.

But the decision has angered Henley councillors, who spoke against the plans at the meeting. They say:

• The site wasn’t earmarked for housing in the joint Henley and Harpsden neighbourhood plan, which states that the Newtown industrial estate should remain a key employment centre.

• The development will have only eight “affordable” flats but the district council’s own policy on new schemes is that 40 per cent of units should be affordable, in this case 17.

• The district council’s own local plan, which is due to be adopted by the end of this year, asks Henley to find a hectare of employment land in the updated version of the neighbourhood plan yet this development will result in the loss of commercial space.

Mayor Ken Arlett, who is a member of the district council’s planning committee, told the meeting: “The application is destroying everything that neighbourhood plans stand for. Why are we wasting time on these plans when we’re not going to adhere to them? The land is not in the joint Henley and Harpsden neighbourhood plan, it’s not even in the review.

“We just don’t need any more of these so-called ‘reasonably priced’ flats which go for £480,000/
£500,000. I can tell you, I live in the town, there’s no need for this number of flats. There’s a need for small units in town for commercial use and that’s what needs to take place there.

He said the industrial estate was a main employment centre in Henley and the Andersen House site should be used for high quality office or workshop accommodation only.

Cllr Gawrysiak said: “Right next door is a garage that is servicing motor cars, across the road is a place bolting tyres on to cars. There’s also a unit for storage.

“There are four other office buildings on this industrial estate that, if this planning permission goes through, could fall to housing.”

Councillor Lorraine Hillier, a member of the committee, said that approving the application would “make a mockery” of all neighbourhood plans.

Kate Gregory, a Liberal Democrat councillor for Thame, said: “We spend a lot of money and time on our neighbourhood plans and to have a development this large just going against that is ridiculous.”

Paula Fox, the district council’s development manager, said that just because the site was not in the neighbourhood plan didn’t mean the application should be automatically refused. Planning officer Amanda Rendell, who recommended approval of the application, said that not all the employment space would be lost and there was likely to be demand for the new offices.

She said that while the site was not allocated for housing in the neighbourhood plan, it would provide much-needed affordable homes and contribute to the council’s required provision.

The meeting heard that the site had been vacant for 10 years since it was vacated by digital signage firm Onelan and marketed since 2017 without success.

Lucy Anderson, of planning consultants Boyer, said the scheme would be an “exciting” regeneration of a brownfield site with “high quality” flats and modern office space ideal for small businesses and start-ups.

She said the number of affordable units complied with the policy because the applicants were permitted to trade off these against the proportion of commercial space as the building was vacant.

Ms Anderson added that the development would include green space, a play area, new planting and additional landscaping. There would also be 47 parking spaces for residents and visitors.

Councillor Peter Dragonetti, who represents the Green Party in Kidmore End and Whitchurch ward, said development would be in a sustainable location and there were no strong planning reasons to refuse the application.

“If we refuse it and it goes to appeal we’ll be an absolute laughing stock,” he added.

He proposed acceptance and was seconded by Cllr Jo Robb, who represents the Green Party in Woodcote and Rotherfield ward.

The application was appoved by six votes to four with one abstention. After the meeting, Michelle Thomas, who chairs the town council’s planning committee, said the decision undermined neighbourhood plans and rode “roughshod” over all the work done on them.

“The message they are sending out to developers is that neighbourhood plans have no weight,” she said.

She called on the Lib- Dem/Green coalition, which controls the district council, to come up with a suitable policy to unite behind every neighbourhood plan in the district.

The building was named by Keith Barker, founder of Videcom, which used to be based there, after Californian Charles Andersen, the European vice-president of Ampex Corporation, who lived in Henley.

Meanwhile, the town council has recommneded that a plan for a series of alterations to a listed property in Thames Side is refused planning permission.

Marisa Bucknell wants to alter an existing modern extension to the rear of the building, widen its footprint and convert it from a single storey to two. She also wants an adjacent single-storey glass extension.

Cllr Gawrysiak said it would mean placing a “huge” slab of glass on a listed building.

Members unanimously recommended refusal due to the impact on a listed building, light overspill from the proposed construction affecting neighbours and the lack of respect for the character of the building.