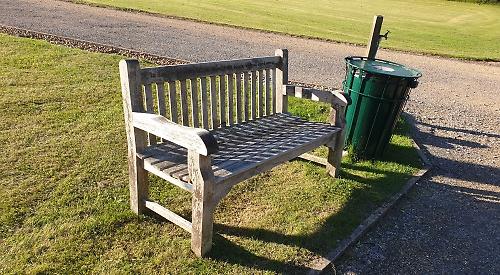 THE town clerk for has apologised for the upset caused by Henley Town Council’s decision to remove memorial benches from Fairmile Cemetery.

The council placed a notice on all the benches currently in place, saying that an increasing number were unauthorised and these had to be removed by the end of this month or it would dispose of them.

It also said that relatives could instead buy a bench from the council for up to £1,000 and these would be placed where it decided.

The notice provoked anger among families who called the council’s new policy “heartless” and “distasteful”.

Now town clerk Sheridan Jacklin-Edward has apologised in a letter to this week’s Henley Standard explaining the policy, which he says was in response to cases of vandalism and benches being placed on the wrong graves.

He says: “Over the past 20 years, almost 30 benches have appeared in Fairmile Cemetery. Of those, six have been put on plots owned by other families, three are, sadly, broken and seven will likely need repairing in the near future.

“Most of the benches have also not been fixed to the ground and earlier this year a bench was stolen.

“As the majority of benches had been put in place without the council’s consent, we did not have contact details for the owners and so a notice was placed on each bench, giving three months’ notice to owners to remove the bench, or to contact the council if they wished to discuss it.

“While our intention was to keep the message clear and simple, in hindsight, the wording of the notice should have been better.

“We realise that is has caused distress to families, for which I am sorry.

“Where families have called the town council, I’m pleased to say that our cemetery manager has dealt with each issue sensitively and sympathetically.

“She has made it clear that we will review each bench on a case-by-case basis and where the bench is in good condition we will work with them to try and keep it in the cemetery in an appropriate place.

“Throughout the project, our intentions have been to try to prevent sensitive and distressing issues from arising in the future.

“However, we realise that in the process, it has caused worry and upset to the families.

“I am very sorry for this and hope that families now have peace of mind, knowing that we will work with them to protect and respect the memories of their loved ones with lasting and fitting memorials.”

If the council deems it appropriate to remove a memorial bench, residents can buy a replacement from it directly.

Families felt the council had no right to remove memorials, especially those that have been in place for years. Others felt the compromise of relocating a bench would cause upset for families who wanted the memorial to be next to their relative’s grave.