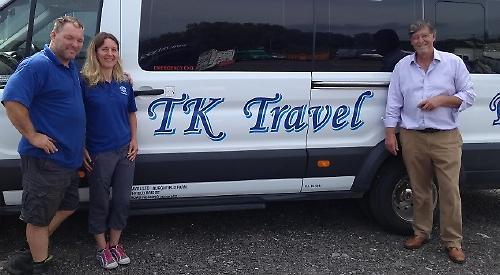 AN award-winning family firm has been chosen to take over the running of Henley’s bus service.

TK Travel, which is based in Burghfield, near Reading, hopes to start operating from Tuesday, October 6, but this could be delayed by a week, depending on the arrival of a new 22-seat bus.

The capacity on the three-day-a-week service will initially be reduced to 12 people in order to comply with coronavirus guidelines.

Passengers will be asked to wear face coverings and hand sanitiser will be available as passengers board the bus. A fogging machine will be used to clean the vehicle regularly.

TK Travel takes over from Reading Buses, which decided to stop providing the 151, 152 and 153 routes in April. It had taken over the service from White Coaches in August 2018.

The not-for-profit service had to be suspended in April due to the pandemic and Henley Town Council invited offers from other bus firms to take over.

The council chose TK Travel, which was voted the best minibus and coach hire company in the South-East last year by SME News

Councillor Stefan Gawrysiak, who chairs the council’s bus group, said: “We were confident that TK Travel were the right operator.

“We were very impressed with their commitment to their service and the reliability of the buses. We were extremely pleased with the service from Reading Buses and disappointed they decided they were not going to continue with the service.

“We went through a tendering process and TK Travel were keen to get a regular service as part of their portfolio.

“As well as being reliable, the personability of the driver is very important and we are convinced that TK Travel will tick all the boxes.

“The bus will stop at designated stops but it will also be a service where people can stand outside their home and put their hand out and it will stop for them.

“In the past, Reading Buses’ drivers would even carry a passenger’s shopping to their front door and this will continue. We are determined to make this a community service.

“It is a vital service for people who would otherwise be stuck in their homes. Now they can come into Henley and do their shopping and then get back safely.”

The service will operate from 9am to 2pm from Tuesday to Thursday rather than Monday to Saturday
previously.

There will be a new stop at the Highlands Park development, off Greys Road.

The service will be supported by contributions from developers building new homes, government infrastructure funding and concessionary fares income.

The total value of the five-year contract is £217,355 and the town council will pay TK Travel a fixed fee of about £280 per day to run the service.

Town clerk Sheridan Jacklin-Edward said: “The council receives all the fare income, plus circa £18,000 per year in Section 106 contributions from Highlands Park to put towards the service. We predict a net loss of £14,000 per year, which will be funded by the council from its reserves.

“These predictions are based on previous pro-rata user figures. However, we hope we will be able to grow the service and make it self-sustaining.

“The contract is for an initial five years, although the council hopes that the bus service will be running long- term.”

The TK Travel bus will have a Euro VI engine, compared to the old gas engine used by Reading Buses.

Councillor Gawrysiak said: “Our top priority was an electric bus because that is the most environmentally friendly bus around but the charging infrastructure is just not there at the moment.

“We would hope that in two or three years the technology will have caught up.

“This is the next best thing. It is very clean and meets all the emissions criteria, including the ultra-low emissions zone in London.”

Cllr Gawrysiak thanked Councillor Lorraine Hillier, vice-chair of the bus working group, Mayor Ken Arlett and deputy town clerk Cath Adams, saying they had all been instrumental in bringing the deal together over the last six months.

TK Travel has been run by Katie Gripton for more than 10 years, working alongside her partner Tony Floyd.

The company is responsible for delivering rail replacement services during Henley Royal Regatta as well as a school service between Henley and St Joseph’s College in Reading.

Miss Gripton, who lives in Burghfield Common, said: “We are really excited and positive about this.

“Community is very important to us and because we have been working in the Henley area for some years now, a lot of people will be familiar with us.

“It is really nice to be able to formalise this partnership and work with the town council to bring this to life. We want to bring the community into the town.”

She said that because the bus was new, the firm had been given a delivery date of September 30 or October 1.

Miss Gripton added: “Our intention is to start on the first Tuesday in October but that might be delayed by a week to get the ticket machines fitted.”

The council has supported the bus service financially since 2016 when Oxfordshire County Council scrapped all its bus subsidies.