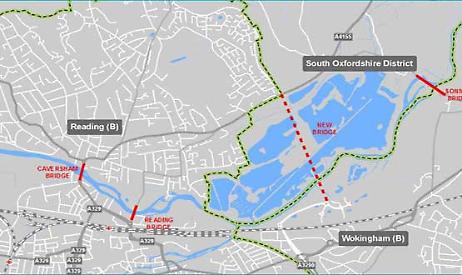 PLANS for a third Thames bridge in Reading are facing renewed opposition.

Ten parish councils in South Oxfordshire have put their names to a joint letter of objection.

Reading Borough Council’s latest transport strategy outlines proposals for a new Thames crossing, linking the eastern side of Caversham to the A3290.

It would go from the A4155 near Playhatch to the Thames Valley Park on the east side of Reading, spanning more than a mile over Caversham lakes.

The council also proposes an “orbital road” linking the A4074 to the A4155 and a park and ride scheme north of Reading.

It says these proposals would address high levels of congestion through Caversham.

But the Oxfordshire councils say that they would result in more traffic coming through rural villages on their side of the river.

The joint letter from the parishes says all three main councils should be working as a single authority on all issues affecting the communities on the north side of the Thames.

It says: “All these councils urge Reading council to abandon its proposal for a third Thames crossing and the proposed north orbital route. Each of those proposals is in direct conflict with the principles adopted in its own transport strategy.

“They reflect the historic, long-held and now outdated ambitions of councillors of Reading, which no longer have a place in the present and future climate conditions affecting our society.

“Very little space is given to the justification for the third Thames crossing and the new orbital route, which is not primarily in ‘the north of the borough’ but in Oxfordshire.

“Traffic flows north and south over the third bridge would have a seriously detrimental effect on the rural nature and amenities of the affected parishes.

“The local transport plan marks the clearest and most uncompromising statement by Reading council that the protection of the environment in the neighbouring county of Oxfordshire and the amenities shared by those who choose to live there have a value of zero in their calculations.”

The county council’s objection states: “We are opposed to the plan in its present form as we do not agree with the proposed schemes and measures it includes for cross boundary travel between Reading and Oxfordshire.

“We are particularly concerned about the approach proposed to developing large-scale ‘multi-modal schemes’ to the north of Reading, in particular the proposed Thames crossing, Reading orbital route and park and ride sites.”

South Oxfordshire’s response reads: “We believe that development and delivery of these major schemes is inconsistent with the objectives and many of the policies of the plan.

“They will not be effective in managing cross-boundary travel movements and are likely to have significant negative impacts on South Oxfordshire.”

Sonning Common Parish Council decided against putting its name to the letter and submitted its own resonse.

Chairwoman Carole Lewis said: “Though the councillors agreed with 95 per cent of the content in the response, they felt it was too aggressive.”

Councillor Douglas Kedge said: “I feel personally the response was abrasive and unnecessary. The document is saying that there will be no reasonable discussion until the Reading bridge is off the table.”

He said: “My concern has always been that Reading seem intent on driving the question of cross-Thames travel forward to suit their own agenda with no prior discussion with Oxfordshire at all.

“They knew of the very great concerns both the district and county council had. We hoped they would have had the sense to have a conversation with Oxfordshire before they went ahead with consultation.

“We have gone from a mile-long bridge, which could have a huge impact on South Oxfordshire, to Reading’s own version of the M25. It would also go through areas of outstanding natural beauty.

“I’m sure if we had come up with a scheme that affected Reading town centre they would be upset. There is no doubt that this strategy would be hugely beneficial to Reading but it would be to the gross detriment of South Oxfordshire.

“The three elements they are proposing are also in conflict with their overall policies. They are talking about climate change and reducing dependency on car travel but all three suggestions are based on current thinking about cars.”

In February, Henley MP John Howell called the business case for a third bridge “utter rubbish” after Wokingham Borough Council, which supports the scheme, submitted a strategic outline business case to the Department for Transport.

He said there was no point in building the bridge unless the road network in Oxfordshire was taken into account.