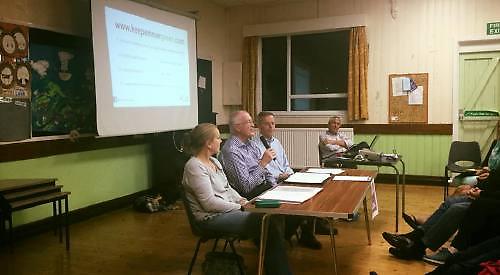 A COUNCILLOR has been cleared of wrongdoing over her public opposition to plans for 260 homes at Reading Golf Club.

Clare Grashoff was accused by the club of abusing her position in encouraging residents to criticise its planning application.

She is a member of Reading Borough Council, representing Peppard ward, which includes part of the golf club land off Kidmore End Road, Emmer Green, where the development would take place.

The club complained in writing to the council, saying she was playing a “leading role” in the fight against its proposals.

The letter included a photograph taken from the website of Keep Emmer Green, which opposes the development. showing her with Reading East MP Matt Rodda at a public meeting, which the club claimed was organised by her father-in-law Greg Grashoff.

The letter, which was unsigned, said: “It is clear that she is using the status of her public office in order to benefit her direct family, namely her father-in-law and husband, most specifically their million-pound home which is situated right next to Reading Golf Club.

“There is obvious pecuniary and family interest here, which appears not to have been disclosed to her electorate.”

The club also included a social media post by Cllr Grashoff in which she instructed residents on how best to oppose the application.

In her post, she said: “Copying and pasting other people’s objections is not as powerful as writing an objection from your perspective, listing your own personal concerns about the potential development.

“These might be to do with traffic, the impact on the children at Emmer Green Primary School and pre-school and also Highdown, as well as other vulnerable residents in the area. Write about what bothers you most from your own perspective; it will be much more impactful.”

The club said both members and residents were “outraged by the obvious abuse of her position” as a ward councillor.

The letter said: “There are many other examples across social media, which all point to her making a serious breach of the councillor code of conduct and, as such, she needs to be made to account for this serious abuse of her position.

“To campaign so publicly against an application in her own ward, using her position as a councillor but never declaring her family, personal and financial interest, is a serious breach of the rules of Reading Borough Council, along with the Nolan rules of standards on behaviour in public life.

“We are advised that all these actions are in breach of the expected conduct of a councillor and that her actions are clearly prejudicial to our planning application.” The complaint was considered by the council’s monitoring officer who decided not to take any action.

A council spokesman said: “In examining the complaint, Cllr Grashoff’s long-standing opposition to large-scale developments in her ward was considered, as was the key role ward councillors play in campaigning on matters of local concerns.

“Additionally she has no direct financial interest in the golf club, nor properties adjacent to the club.

“The complainant has been written to and informed of the monitoring officer’s decision.”

Cllr Grashoff called the complaint “ridiculous” and said she was “delighted” to have been vindicated.

She said she had acted only in an advisory capacity to Keep Emmer Green, along parish councillors from South Oxfordshire.

Cllr Grashoff said: “My reputation for campaigning against large-scale, unsustainable planning applications in north Reading is well-known by many of my fellow councillors, members of the planning department and most of the residents’ associations.

“I spent two years publicly campaigning against the proposed Gladman development on land in South Oxfordshire, right next to the border of Emmer Green, because of the pressure that a development on the border would put on the services and infrastructure in Reading and the precedent that it would set for further large-scale development along the border.

Cllr Grashoff, a Conservative, has lived in Caversham and Emmer Green for 16 years. She was first elected as a ward councillor in 2015 and was re-elected in May last year.

She is the only Peppard ward councillor who can publicly oppose applications as the other two representatives, Jane Stanford-Beale and Simon Robinson, are both on the council’s planning committee so must remain impartial.

Cllr Grashoff added: “In January 2018, Reading Borough Council closed its consultation on the emerging local plan. In it was a small allocation for 90 to 130 houses on Reading Golf Club.

“Just after the consultation period ended it became public knowledge that Reading Golf Club was not looking to develop just this small part of the site but was, in fact, considering selling all its land for development and relocating.

“Given my history of fighting cross-border development, this prospect was something that also gave me grave cause for concern.

“My main reasons for choosing to campaign against this development are clearly evidenced by the widespread opposition, along with the wider implications of future development in South Oxfordshire, and because it is my opinion that a development of this size is not sustainable in this part of Reading.”

A Reading Golf Club spokesman said the letter spoke for itself and it had nothing to add.