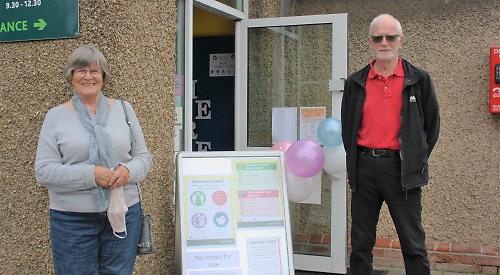 VOLUNTEERS who help run Sonning Common library are happy that it is open again, albeit with reduced hours.

The building in Grove Road is open 13 hours a week compared with 22 before the coronavirus pandemic.

It was closed in late March due to the lockdown and only re-opened on Monday last week as part of Oxfordshire County Council’s phased
re-opening of libraries across the county.

The reason for the library being open nine hours less than usual is due to the extra cleaning needed to help stop the spread of covid-19.

This is a temporary measure but there is no set date for when the library will return to normal.

Jenny Jones, of the Friends of Sonning Common Library, a group of volunteers who help run the library as well as organising fundraisers to maintain it, said: “We found out 10 days before we re-opened about the reduced hours.

“We had to disappoint seven volunteers as we had done the rota already.”

Many group sessions that used to take place in the library have been cancelled. Ms Jones, who has been a volunteer since 2014, said: “We used to have story time, rhyme time, Scrabble sessions and the knit and natter group.

“We’ve had authors giving talks and theatre groups have come to give shows. These things made it special and fun and it encouraged younger people.

“The community will miss the things we used to do in there but there is nothing we can do about that.”

She added that if Sonning Common Primary School, which is next door to the library, didn’t use the library as much is it intended, then perhaps the spare time would mean more hours of opening to the general public. Other measures have been put in place to keep library visitors safe, including the removal of a lot of the furniture.

Ms Jones is storing all the bean bags at her home for the time being.

The library is also operating on a one-way system with a QR code that people must register with on the new NHS track and trace app.

Only six people, including staff, can be inside the building at once with a maximum visit time of 30 minutes each.

Ms Jones said: “All we can do at the moment is stand at the door or restrict the number of people that can go in.”

Fellow volunteer Gordon Haigh, 72, said: “It’s always going to be at the back of our minds that the library may not go back to the way it was. We’ve lost a lot of the opening hours during the evenings and lots of people can’t come during the day, so there is a group who will find it more difficult to visit.

“We are grateful that we can open at all but it is combined with the disappointment of the reduced hours.”

Mr Haigh, of Baskerville Road, Sonning Common, is a retired IT consultant and used to offer IT training to visitors.

He said: “We can’t do it anymore because you’re sharing keyboards and sitting close in a circle.”

In July, the volunteers feared that the library would not re-open at all and when the bigger libraries in Oxfordshire started to re-open, the Friends group wrote to the council asking when Sonning Common could follow suit.

Ms Jones said: “We are absolutely thrilled that the library is open but the bigger libraries have been open for a while and we could have opened ours much sooner than this.”

Mr Haigh added: “We are somewhat disappointed that it took so long.”

Despite this, the volunteers are happy to see visitors back inside.

Ms Jones said: “It’s absolutely wonderful. We’ve all worked so hard to make the library as great as possible. What we needed more than anything was to say that we are open.”

The current library opening times are Mondays and Wednesdays from 2pm to 5pm, Fridays from 9am to 1pm and 2pm to 5pm and Saturdays from 9.30am to 12.30pm.