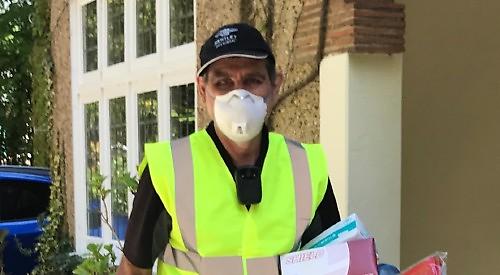 THE Deputy Mayor of Henley has hit back at a former councillor who accused him of posing as an unofficial covid marshal.

Jonathan Barter complained about David Eggleton during a town council meeting, saying he had entered several pubs wearing a body camera on behalf of the council but had no such power.

Councillor Eggleton, who was not at the meeting, told the Henley Standard that he had not been on council duty and the camera had not been switched on.

Mr Barter, a former Conservative councillor, said he was in the Old Bell pub in Bell Street on the evening of Friday, October 2, when Cllr Eggleton entered wearing a hi-vis jacket and the body camera.

“The landlady was under the impression that he represented the council,” he said. “I’ve also heard that he has done the same at Hof’s on the same evening.

“It seemed to be, from what I saw, that he has appointed himself as a covid marshal and is circulating the town, purporting to represent the whole council. His rather bogus attire brings the whole council into disrepute.”

Town clerk Sheridan Jacklin-Edward said Cllr Eggleton did not represent the council in this way but added: “It is very good that we have councillors who take an active role in the community, especially in these times.”

Cllr Eggleton, who is a member of the ruling Henley Residents Group, said he was upset by Mr Barter’s comments.

He said that he had gone into the pubs because friends were inside drinking. He often wore a body camera for “his own protection” and only wanted to do his best for Henley by identifying potential problems with crime and antisocial behaviour. Cllr Eggleton said: “This is all about assuming just because I had a body camera on. Just because someone is loitering on the corner, it doesn’t mean they are going to smash a window or burgle a shop.

“Everybody knows me as a councillor, so they probably assume I’m on council duty 24/7 but I’m not. The only time I’m on duty is when I’m asked to do something, or at a council meeting. I would never breach what I am allowed to do.

“There have been a few incidents in the town recently. I’m not going out policing it but I am just very passionate about the town and where my family and friends live. If there was an incident, I would let the police deal with it.

“I’m out to help people. My body camera is never switched on but if someone comes up to me and gets abusive, I can switch it on and then I’m covered.

“I’ve known Jonathan for a long time and this has taken me by surprise. I always respected him and over the years I’ve always spoken to him pleasantly. I don’t know why he wants to belittle me. The police know that I’m out and that I’m not doing anything wrong. I’m doing it as a citizen of Henley.

“There has been talk online in the last couple of weeks about the lack of police presence and what I don’t want is vigilante groups going out.

“I thought that if I go out, I can see where these things are and what needs to be done.

“When I go into a council meeting, I can come into a discussion with more experience. It is not about persecuting people but seeing how we can work together.”

Cllr Eggleton, a former Henley Heroes winner, added: “I help as many people as I possibly can. It was devastating to me. If I’d done something wrong then that’s fine, but I’m trying to do as much good as possible.”

Mr Barter was elected to the council in 1999 and stood down in 2007 due to family commitments. He stood for election again last year on behalf of “Party Free” but was not successful.