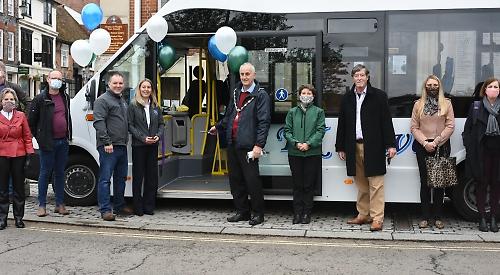 RESIDENTS of Henley have been urged to use the town’s new bus service or risk losing it.

The message was delivered by the Mayor Ken Arlett at the official launch of the new Henley Hopper on Saturday.

The 22-seat bus, which came into service on October 13, is operated by TK Travel, of Burghfield.

The company has taken over the 151, 152 and 153 routes from Reading Buses, which did not renew its contract in April when the service had already been brought to a temporary halt by the coronavirus lockdown.

The bus runs on Tuesdays, Wednesdays and Thursdays from 9am to 2pm, rather than from Monday to Saturday previously.

The Mayor was invited to cut the ribbon as fellow town councillors gathered in front of the bus in Market Place along with Katie Gripton, who runs TK Travel with her partner Tony Floyd.

Councillor Arlett said: “What we’re asking is for the town’s residents to stand up to the plate and use the service. Without them using it, it just won’t run. We know there are enough people out there that can use this service.

“If it is well used, the hours will increase and that is what we’re hoping to do in the long run.

“This is a brand new bus that we will all be proud of and we just hope it will be very successful.”

He thanked Councillor Stefan Gawrysiak, who chairs the council’s bus group, and deputy town clerk Cath Adams for their hard work on the project.

He also thanked Councillor Rob Romans for recommending TK Travel. Cllr Gawrysiak said: “We’ve spent a lot of time bringing this together. We had tenders from four companies and we’re extremely pleased that TK Travel are delivering the service.

“It will always be a community bus service and it is for everybody in the town but especially the elderly because they could become isolated.”

He said the service could be expanded if finances allowed and use of the bus justified it.

Cllr Gawrysiak added: “People understood why the bus had to stop — because of covid — but they were missing it.

“Regularly, people were ringing the town hall and asking when it was going to start again.

“We did think about delaying it to next spring when the weather will be warmer but we said it should be back because it is a service for the community.

“Since it started, people have said they’re extremely pleased with it.

“The bus working group will look at the figures after six months and see if there is room to expand it.”

Ms Gripton said: “We’re delighted to be running the new service for the Henley community. I think it is a really valuable service.

“The more people we can get to use the bus the better. We’d love to see the service expanded in the future so that more and more people can come into the town centre.”

The not-for-profit service is supported by contributions from developers as well as a subsidy from the town council, which has helped fund the town bus since Oxfordshire County Council removed subsidies in 2016.

The total value of the five-year contract is £217,355 and the council will pay TK Travel a fixed fee of about £280 per day to run the service.

The service is using the same routes with an extension to serve the Highlands Park development.

The bus, which has a Euro VI diesel engine compared with the gas engine used by Reading Buses, can currently carry only 12 passengers due to coronavirus restrictions and passengers using it must wear face masks.

It has low access, space for wheelchairs and shopping trolleys and air conditioning.

It remains a hail and ride service and if the driver can safely stop, they will pull in whenever they are flagged down. Concessionary bus passes are valid on the service.

Timetables can be collected from the town hall or on the bus. They can also be viewed online at
tktravelltd.com TK Travel can be contacted on 0118 970 0600.