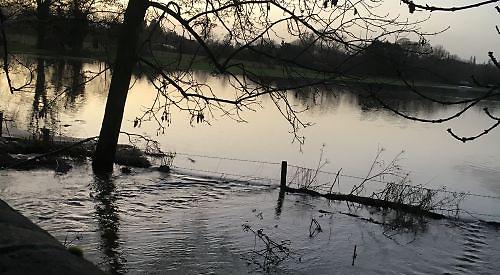 RESIDENTS who fear a new housing development will increase the flood risk to their homes have been granted a temporary reprieve.

South Oxfordshire District Council has delayed a decision on a request by Taylor Wimpey to drain surface water from Regency Place, off Reading Road, Shiplake, into Lash Brook on the other side of the village.

It has also asked the company to conduct a full flood risk assessment.

The developer has planning permission for 95 homes at the site, formerly Thames Farm, but construction work has not begun following the discovery of potential sink holes on the land.

The council was due to make a decision on Friday but postponed this at the last minute after scores of people living in and around Mill Road, which runs along the brook, sent letters of objection.

The brook has flooded several times in recent years and the residents say the development would make the problem worse.

Taylor Wimpey originally planned to drain surface water using soakaways, which channel it deeper into the ground, but had to change tack after discovering the chalk bedrock was prone to developing sink holes.

It now plans to inject weak areas with a type of grout and channel water to a pumping station in one corner of the site, then lay a new pipeline from here along Reading Road, Station Road and Mill Road into the brook.

It claims the water would then drain into the River Thames. Residents say the brook, which is in a “high risk” flood zone, is a partially blocked backwater rather than a tributary so would be more likely to swell unless it is was widened or cleared.

It already struggles to drain under heavy rainfall and when it burst its banks in early 2014, several houses were evacuated and Mill Road was under water for weeks.

The Environment Agency, which is responsible for water courses, has not commented on the company’s plans.

David Bartholomew, who represents Shiplake on the district council, welcomed the delayed decision.

He said: “In view of the local knowledge that has been imparted to our officers, they have reconsidered and said a flood risk assessment is necessary. This is a relief as there were wider issues to be considered.

“We found ourselves in a strange situation whereby the Environment Agency wouldn’t comment because Thames Farm is in a low-risk flood zone and a full assessment was therefore ‘unnecessary’.

“However, this was baffling because the water was being drained into a higher risk area.

“The agency has told us that Oxfordshire County Council should have made a full flood risk assessment when the planning application was submitted but this wasn’t mentioned back then because Taylor Wimpey didn’t know about the ground problems. There’s no way anyone could have known.

“I hope the developer will respond positively to this request and I’m glad that people took time to write in because such an overwhelming response couldn’t be ignored.”

David Pheasant, vice-chairman of Shiplake Parish Council, said: “It’s good to see some sense coming into this situation and that its seriousness is finally being appreciated. This has been prompting an awful lot of concern.

“The proposal needs a full flood assessment and not just a cursory one drawn up on a desktop. So many officials were saying that this wasn’t necessary but it absolutely was and I hope it will now be given an appropriate level of scrutiny.”

Henley MP John Howell, said he was pleased the district council had deferred the decision but criticised it for not organising a public meeting in the first place.

He said: “I think it’s tantamount to cowardice that they didn’t do this. They [the Liberal Democrat and Green Party coalition] came to power with the view that they were going to protect people in planning decisions but they have totally failed to do that in this instance.

“I’m very disappointed that they didn’t engage in much more detailed discussions and consultation about it. What they’re doing now is a purely technical approach which comes as too little and too late.

“They need to listen to the residents themselves and understand exactly what they’re frightened of.”

The Environment Agency didn’t respond to a request for comment,

Taylor Wimpey’s drainage plan was drawn up in conjunction with Thames Water, which would adopt the pumping station once it was built. If approved, it could take two years to finish and no houses could be occupied until then.

Abley Letchford Partnership, the developer’s engineer, accepts that changing water flow can “lead to… flooding downstream” but says there wouldnt be a problem in this case.

The developer has said it understands and appreciates residents’ concerns and it is working on a solution to drainage of the site.

Plans to redevelop Thames Farm were rejected by the district council in 2016 but landowner Claire Engbers later won a planning appeal.