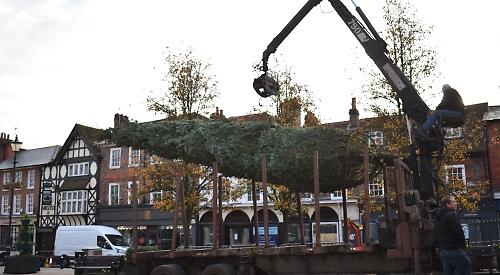 HENLEY’S Christmas tree was installed in the town centre this morning.

The 35ft Nordmann fir, grown by the Tree Barn in Christmas Common, arrived on a flat-bed truck and was lowered into a hole in the ground in Falaise Square using a crane.

Members of the town council’s parks services team trimmed the base with chainsaws so that it would fit, then wedged blocks of wood around the base to hold it in place.

A few members of the public stopped to watch the half-hour operation.

The tree was chosen by Mayor Ken Arlett and is sponsored by Invesco.

Councillor Arlett has also chosen the winner of his Christmas card competition which will be announced later this week.

This year’s theme is “Henley-on-Thames Magical Christmas Tree 2020” and the first, second, third and fourth placed designs will be displayed at the Kenton Theatre in New Street.