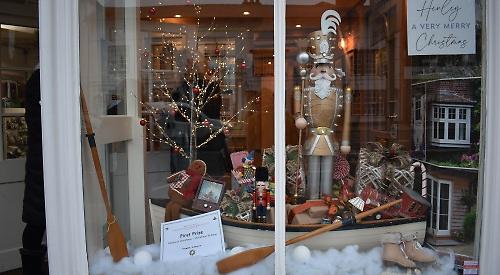 THE winner of this year’s Henley Christmas window display competition has been decided.

Timber Windows in Hart Street was one of about 26 businesses to enter the contest, which had the theme of “Christmas in Henley”.

Every retailer who made an effort to decorate their window was entered automatically.

The winning display had a nutcracker theme, with a golden nutcracker stood on a boat full of gifts.

Lynette Tweedy, a showroom assistant at the store, really wanted a boat incorporated into the display, which was designed by the shop’s marketing team.

She said: “I wanted the boat and the river because we’re located right next to the River Thames.

“The marketing team designed it and they did a fantastic job, it’s very Christmassy.”

The store has only been open for a year and so this was the first time that they took part in the competition.

Mrs Tweedy said: “We are incredibly excited and in the Christmas spirit and very glad to be supporting Henley.

“This is a great way to get started in the area, we are very pleased to be here and to be accepted as a part of the community.”

The judges visited all the businesses that entered today and awarded points for how well the brief was followed and the creativity of the displays.

In fourth place was wellbeing and home decor shop, Wild & Rust in Duke Street, for its sustainability and kindness display.

Co-owner Bea Pearson said it was lovely to receive the award and to be recognised by the town for the display, which was designed by co-owner, Nicki Barley.

She said: “It’s a nice initiative of the town to recognise the effort of the retailers.

“Our window is about what is important to us, we wanted something that resembled our ethos which is sustainability.”

The first three places won a certificate, prosecco and a cash prize. Special recognition has gone to The Henley Larder in Bell Street and The Kiln Ceramic Cafe in Reading Road.

Mayor Ken Arlett, who judged the displays alongside his wife Dorothy, said: “It was a lot harder to decide than it’s been before, it was difficult to choose and any one of the businesses could have won.

“People obviously had more time to decorate this year due to the lockdown and dare I say that’s the only positive thing to come from coronavirus.

“We judged over 20 shops which is much more choice than previous years – it was really good and exciting but also really cold.

“All the judges chose a different number one but we did it by a point system and Timber Windows won by one point, it was that close and it was the same with the other displays.

“I think it will make people look into the shops more. We want to thank them all for taking the interest and we hope it works out in their favour.”

Other judges were Richard Rodway, organiser of the Henley Living Advent Calendar and a partner at the Head Partnership solicitors, Carolyn Molyneux, the proprietor of Delegate Office and Conference Services and Helen Barnett, the town and community manager.