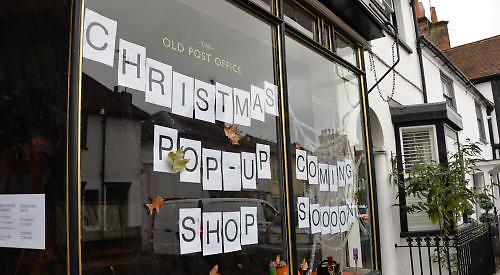 PART of the old post office in Wargrave could be returned to residential use.

Chris Jones, who bought the property in July last year, wants to create a one-bedroom home by altering parts of the ground floor and first floor.

She has asked Wokingham Borough Council, the planning authority, for change of use permission as the ground floor area is currently classified as commercial space.

The building in High Street currently has both a two-storey section and single-storey part and is at the end of a row of terraced houses.

It was used as the post office for more than 150 years with residential use on the first floor and at the rear of the ground floor.

The post office closed in June 2008 and since then it has been used as a florist, coffee shop and pop-up Christmas shop. However, it has been empty for almost a year.

Ms Jones says the conversion would be done sympathetically. She says: “The proposal is to change part of the existing ground floor and part of the existing first floor back to the original purpose and to reinstate the residential use that existed for more than 100 years.

“The front, side and rear elevations of the building will not be altered and only minor internal work is required to achieve the conversion.

“There will be no impact on the street scene and the conservation area will be maintained and preserved.

“We have explained our plans for the property and our intention to become an active part of this friendly and welcoming local community.”

A design and access statement submitted with the application says: “The owners have already spent time getting to know their immediate neighbours and are keen to be part of the local community.” Wargrave Parish Council has not raised any objections.

Support has been received from residents, including neighbour Christopher Morrisson.

He said: “It would have the same usage as when we moved into our house in 2005 and this would have no impact on us or the other neighbours. In fact, it would be beneficial to us.

“The owner of the property is keen to work with all the local residents and wants to enhance the high street. The owner has made a conscious effort to keep us informed at all stages and we can see no reason to object.”

The post office closed when it was no longer deemed to be viable as part of the Government’s forced closure programme.

It was bought by Tony Colborne and housed a florist and home interiors shop from May 2009 to July 2011 before becoming a café in March 2012.

After Mr Colborne separated with his wife, Lynda Walker, she asked the borough council for permission to turn the unit into a home.

She said businesses in the high street were struggling to survive.

The application was rejected on the basis that it would have harmed the vitality of the village. Dozens of residents wrote letters to the borough council, saying it was an important asset in Wargrave.

In 2013, the property was leased to Karin Edlind and Tim Lawrence who re-opened the coffee shop.

Their lease came to an end in August 2019 and was not renewed.

In December 2019 a Christmas pop-up shop was opened by  Mel Stack and Libby Spratley.

Ms Jones says Wargrave has other community assets, such as the Daisy Love coffee shop, which opened in High Street in October.

Parish councillor Nick Hart and his wife Sarah are also due to open a café this year.

H’artisan Speciality Coffee will be at the former offices of Quantum Valuations and Talbot & Associates, also in High Street.