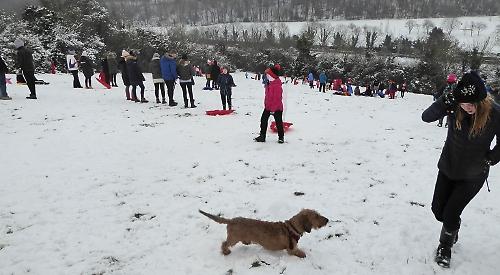 THREE residents have launched a campaign against plans to develop green land on the outskirts of Henley.

They want to prevent the upper field on Drawback Hill, which runs behind the houses in Blandy Road, and a neighbouring sports pitch at Gillotts School from being earmarked for up to 150 new homes in the town’s revised neighbourhood plan with Harpsden.

They are organising a petition to send to Henley Town Council, which is updating the document to reflect an increase in housing targets, and South Oxfordshire District Council, the planning authority.

They will also circulate a leaflet to raise awareness and persuade people to respond to the forthcoming public consultations.

The trio — Domenic Bertelli, Justine Hutchinson and Christine Wright — say the land is a haven for rare wildlife and building on it would put needless pressure on surrounding roads, shops and public services.

Bloor Homes wants to build 100 homes on eight hectares at Drawback Hill, which is part of Lucy’s Farm in Harpsden, and is in talks with the school about 50 family homes on the disused sports field, which covers 3.4 hectares.

Gillotts wants to sell the land for between £10 and £20 million to fund new facilities and a refurbishment of its dilapidated Sixties buildings but no agreement has been reached.

The developer and the school have asked the town council to include their sites in the new neighbourhood plan, meaning a planning application at either site would be more likely to succeed.

The document must pass a referendum before it becomes legally enforceable so the campaigners are asking people to vote against it if the sites are included.

The council recently conducted a survey on housing need but is yet to publish the results or decide which of the 13 sites put forward by landowners should be included.

Mr Bertelli, Mrs Hutchinson and Mrs Wright, who are friends, say building on Drawback Hill would be particularly unpopular with residents.

They accept it is harder to oppose the Gillotts scheme because the site was earmarked for 50 homes in the existing neighbourhood plan but say any development would make it easier to justify building next door.

They say the pitch at the school’s north-eastern boundary shouldn’t have been included in the original plan because of its rural location and the school should seek other ways to raise money.

Mr Bertelli, whose family has lived in Peppard Lane, Henley, for more than 40 years, began planning the campaign when Oxfordshire County Council, the highways authority, resurfaced the bridleway at the top of Drawback Hill in 2019.

He feared a development bid was looming as Lucy’s Farm was put forward for inclusion in the first neighbourhood plan but rejected following a consultation in which only 26 per cent of respondents were in favour, making it the least popular choice.

When the town council appealed for housing sites last autumn,
Gillotts confirmed it still wanted to build on its field while Bloor revealed its updated vision for Lucy’s Farm, which is owned by farmer Pat Hiscock.

The developer says there is “potential marriage value” between the sites, which could be accessed via a shared entrance off Blandy Road.

Mr Bertelli, a music teacher, says Drawback Hill is home to dozens of bird species, including haw finches and three kinds of woodpecker, which don’t nest in domestic gardens as they need large, open habitats, and several unusual butterfly species, including marbled whites, small blues, brimstones and red admirals. He said it was vital to protect green spaces after Taylor Wimpey won planning permission on appeal in 2018 for 95 homes at Thames Farm, near Shiplake, despite it not being included in the neighbourhood plan.

Mr Bertelli said: “We’ve spoken to so many people and nobody wants development in the Harpsden valley. I might live near those fields but this isn’t Nimbyism by any means — our supporters across Henley agree this is a heinous proposition.

“The sites obviously aren’t appropriate and stopping both would be the optimal outcome, though we have to be realistic.

“They have the most fantastic array of British wildlife, which we should protect as it’s becoming more scarce. I grew up on a farm so I’m a conservationist at heart and hate to imagine it being decimated.

“Although the Gillotts proposal is separate from its neighbour, Bloor has a clear interest in both and I don’t believe it only wants to build at the school — it would unquestionably be a way of pushing deeper into the Harpsden valley.

“It looks like Gillotts is planning a complete overhaul rather than a straightforward refurbishment and is aiming to make the school much more than what it currently is.

“To say, ‘We must build on this field or we can’t improve your school’ is like holding the community to ransom.”

He said it had been impossible to organise public meetings because of the coronavirus pandemic but everyone the trio had spoken to was against the proposed developments.

“Loads of supporters have offered to drop leaflets and we’re even getting emails from people we’ve never met,” said Mr Bertelli. “The response has been very positive so far and I’m confident that we can continue in that fashion.” Mrs Hutchinson, of Queen Street, said she was worried about the effects of development generally.

“It puts huge pressure on things like school places and doctors’ appointments but the environmental impact is my main concern,” she said.

“There was no democracy with Thames Farm, which was opposed by the people and all the local authorities but a planning inspector waved it through.

“We’re worried the same could happen with these sites and want it to be widely known as soon as possible how strongly people are against it. Once those green spaces are built on, they are lost forever.

“I often go foraging for waxcap mushrooms, which are hugely endangered and this is a prime area for them.

“There’s good public access for walking and people get a lot of pleasure from tobogganing down the hill in the winter, which is good for their wellbeing.”

Mrs Hutchinson said new housing shouldn’t be allowed simply because developers were supposed to provide an “affordable” element. She said: “We’re not against genuinely affordable housing but it rarely is, yet these habitats could be destroyed under its auspices.

“In reality, the prices would have to be much lower to fall within most people’s reach. If the authorities truly want to meet people’s needs, they should build social housing on previously developed land.

“There have been umpteen missed opportunities — the new Townlands Memorial Hospital could have had flats for medical professionals, for example. People feel they’re not being listened to.

“A new neighbourhood plan will have to pass a referendum and we hope our campaign will make people think seriously about the impact before they vote.”

Mrs Wright, of Fair Mile, has lived in Henley since 1964 and is retired after working in education.

She says genuinely affordable homes on brownfield land should be prioritised because house prices in the town are so high.

She said: “I’m not stuck in the mud but when I came to Henley, the houses in and around Blandy Road cost about £3,500 when young professionals earned £1,200 a year.

“Now they go for up to £800,000 but can you imagine someone on £23,000 a year affording that? This is a dying town of mostly elderly or wealthy people and you can’t live here if you’re, say, a teacher.

“People will definitely vote against the plan if it includes Drawback Hill because we don’t need to build expensive homes on valuable green space.”

The town council had hoped to hold exhibitions at the town hall next month but this has been delayed until at least April because of the coronavirus pandemic.

Henley Mayor Ken Arlett said he understood campaigners’ concerns but each site would be assessed on its merits.

He said: “Gillotts’ pitch is already in the plan so while I can’t say what will happen, it’s hard to imagine it being removed as it has already been allocated 50 units.

“They’ve said the site could take up to 100 but I’d have thought our working group would reject the higher number.

“We have to consider Lucy’s Farm as it has been put forward for development but some might suggest that better plots are available.

“It was previously rejected from the plan and there must have been good reasons for that.”

Bloor has reduced the size of its Drawback Hill proposal from up to 130 homes and says the impact could be further reduced by pulling housing back from the site boundary.

It says the district council deemed the site fit for development in principle in 2013 and there would be no traffic problems.

But a 2019 report by AECOM, the town council’s planning consultant, said neither that plot nor the school field was suitable because development would erode the green boundary separating Henley from Harpsden.