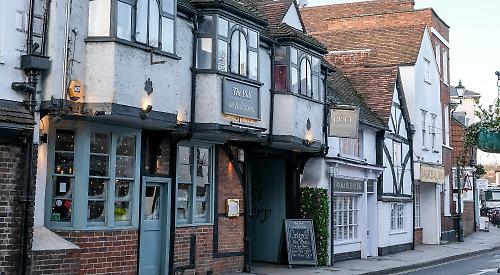 NEIGHBOURS are worried about the noise levels from a Henley pub getting worse if plans for a new garden and terrace area are approved.

Brakspear has applied for permission to convert an “under-used” parking area at the Bull on Bell Street with a view to offering more space for customers.

However, residents have urged South Oxfordshire District Council, the planning authority, to reject the plans.

Amanda Chumas, of Bell Street, said: “I, along with other local residents, have had frequent occasion to complain about the really intrusive amplified heavy deep-beat music and loud obnoxious swearing and shouting from drunk patrons going on until the early hours of the morning, sometimes as late as 3am.

“I am sure that you will appreciate that this is offensive and deprives us all of our sleep.

“Obviously, these issues become particularly acute during regatta and festival periods but they also occur when the Bull holds periodic music nights, which under normal circumstances occur throughout the year. The problem has been so bad at times that we’ve had to complain to the police and environmental health as well as Brakspear.

“Another example of lack of consideration for neighbours is that, prior to the latest lockdown, the Bull had taken to holding quizzes on Sundays in the beer garden.

“While I had no objection to quizzes, I did object to the amplification that the quizmaster used.

“The result was that you couldn’t sit in your own back garden and have a conversation with your own household.

“It seems that consideration for their neighbouring residents is just not part of the Bull’s normal operating code.”

Catherine Rogers, also of Bell Street, said: “I object to this application on the grounds that the area is a mixture of commercial and residential property and the application will result in additional noise pollution.” She is asking for use of the garden to be prohibited after 11pm and for no equipment to be allowed that would amplify noise.

She said: “Historically, there has been a lack of consideration shown to residential neighbours and for this reason, the application should only be granted with these conditions.”

Josephine Scott, of Adam Court, said: “I live just behind the Bull and already find that the noise on certain evenings is most disturbing, especially when there is music.

“It reverberates through my house and I am unable to open my bedroom window due to the noise of the music and loud voices of the patrons late in the evenings.”

Brakspear says the car park has already been used to provide additional space for customers over the last six months due to the coronavirus restrictions.

It is hoping to make the change permanent with new outdoor seating, lighting, space heaters and umbrellas.

A planning statement submitted by Red Kite Consultancy says: “The hospitality industry and public houses specifically have suffered considerable adverse impacts during 2020 due to covid restrictions. Government has recognised this and asks planning authorities to take a positive approach to supporting economic recovery wherever possible.

“Both in the short and longer term, the availability of increased, good quality outdoor space is seen by the applicants as the best way to facilitate the long-term viability and success of the public house.

“In the immediate and potentially medium-term future, while covid restrictions apply, outdoor seating is considered by government and customers to be far safer than indoors.

“The application site has been used for the proposed new use over the last six months to provide increased socially distanced space for customers during the covid emergency, when the premises have been able to open.

“This has not led to any known problems as the car park was underused and frequently vacant previously.”

The staff car park, which provides 15 spaces, would be retained.

The district council is due to make a decision by February 10.