Development could cause pollution of water supply 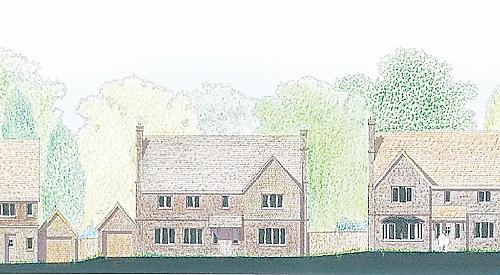 BUILDING 95 new homes in Shiplake could result in pollution of the village’s drinking water, according to a consultant hired by opponents.

Taylor Wimpey is gearing up to develop Thames Farm, a 5.7-hectare field off the A4155 Reading Road, after planning permission was granted on appeal three years ago.

The company later discovered that the chalk bedrock beneath the site is prone to developing sinkholes so intends to inject weak spots with grout to reinforce them.

But Shiplake Parish Council and the Thames Farm Action Group, a residents’ group opposing the scheme, say this might contaminate a public water source which flows through the chalk.

Their expert, JBA Consulting, an engineering firm based in North Yorkshire, says Taylor Wimpey hasn’t done enough to prove its claim that there will be no impact.

It says Thames Farm is a short distance from Thames Water’s borehole off Bolney Lane, which taps into the aquifer to supply the surrounding area.

The former poultry farm, which will be known as Regency Place, is subject to the Environment Agency’s strictest level of groundwater protection because pollution on the site could reach the borehole within 50 days.

For this reason, Taylor Wimpey has ruled out draining surface run-off into underground “soakaways”, which is standard.

Instead, it is proposing to divert the water along a new pipeline into Lash Brook on the other side of the village, which residents claim would worsen the flooding problem on nearby Mill Lane.

The developer insists the grouting would be safe because it would be injected at a shallower level than the water table and is too stiff to flow deeper into the earth.

But JBA says groundwater levels vary across the site, which is sloped, and can rise and fall throughout the year.

It says that if the grouting was to displace the aquifer, this would reduce its storage capacity so the borehole would have to draw from a wider area. This would bring neighbouring land into the high protection zone, increasing the risk of pollution and imposing constraints on development in those areas.

JBA also says the grout may contain fly ash, a waste product from coal power plants which is highly alkaline and would have a detrimental impact if it got into the water.

It says Taylor Wimpey should produce a hydrogeological assessment of the site which should be approved by the Environment Agency and Thames Water.

It says: “Current risk assessments assume that grouting will be entirely above the water table of the aquifer but it is unclear from current data whether this is the case across the site.

“Groundwater monitoring should be carried out before, during and after construction to assess any ongoing impact following grouting.

“Regardless of mitigation measures, the scheme cannot mitigate against the increase in the borehole’s catchment due to loss of recharge to the aquifer.

“This will increase the vulnerability to pollution of the public water supply and could put additional restrictions on nearby land which is captured in the extended protection zone.

“If the grouting is never below the water table, these impacts may be minimal. However... once the water table is within the lower permeability grouted material, this ground may become saturated fairly rapidly and not allow rapid flow of groundwater as at present.” The parish council has sent JBA’s report to South Oxfordshire District Council, the planning authority, which has ordered Taylor Wimpey to submit a flood risk assessment before it will approve any drainage scheme.

Peter Boros, leader of the action group, said JBA was hired to look into the Lash Brook drainage issue but flagged up the pollution threat.

He said: “Our original expectation was that they would look at the potential for flooding around Mill Lane but they said we needed to look into the hydrogeology if we were going to do this properly.

“This is a major issue and comes as a surprise as we never thought they’d identify a possible risk to the drinking water.

“It’s worrying that the authorities didn’t pick up on this in the first place and I think people will be horrified to hear that a drinking water supply is at risk.

“We will be pushing for thorough assessments to be carried out before anything is allowed to happen.”

Taylor Wimpey says it understands villagers’ concerns about the possible impact of the scheme and is looking at several options for its drainage strategy, which it will share with the public at least three weeks before submitting anything to the district council for approval.