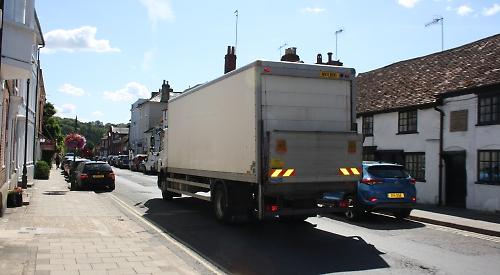 PLANS to ban heavy goods vehicles from using Henley as a shortcut would cost about £120,000.

Henley councillor Stefan Gawrysiak is leading a campaign for an environmental traffic regulation order, which would put a 7.5-tonne limit on vehicles with no business in the town.

He will be putting a motion to Oxfordshire County Council, the highways authority, on March 23.

Cllr Gawrysiak is asking for the weight limit as campaigners are concerned about the high levels of pollution in Henley, which already exceed World Heath Organisation limits.

He is also worried about the issue of highway safety due to the town’s narrow pavements and the impact of vehicle vibrations on the historic buildings.

Cllr Gawrysiak already has the backing of South Oxfordshire District Council and he is confident the county council will agree to support the campaign“in principle”.

The upfront cost of the project is much higher than ongoing costs as signage and automatic number plate recognition cameras would need to be installed. If the motion is approved, the project will require further work.

Council officers must instruct Cllr Gawrysiak of the necessary studies required and there must be a public consultation before being put to the council for a final vote.

He said: “This is so important for Henley and if we get the go-ahead, I will explore every single avenue of fundraising so that it doesn’t fall completely on Henley Town Council to get this into place.

“I would hope there would be some funding for Oxfordshire, but they have made it clear that money is tight and we may well have to do it on our own.

“We will be fundraising from the town council, from private sources and from local companies.

“It is quite amazing, when you set a course going, how you can raise what appears on the face of it to be a large sum of money.

Cllr Gawrysiak said he had a track record of “getting things done” and used the skate park at Makins recreation ground as an example of how large sums of money could be raised.

This required £290,000 and the facility eventually opened following a six-year campaign.

He also said that John Halsall, the leader of Wokingham Borough Council, had shown support for the initiative and offered to contribute.

The traffic regulation order would have a five-mile radius to include villages along the B481.

There is large support in the community for the restriction, with more than 2,400 people signing an online petition.

Cllr  Gawrysiak said he accepted that there were some people who remained opposed, but he hoped to convince them of the benefits. He added: “The thing that has changed is the issue of air quality. In Henley, we are already above World Health Organisation limits and therefore the district and county council have to come up with a solution.

“We have families with young children walking around on narrow pavements. Something has to be done and this is an absolute step in reducing the vibration and potential damage to our buildings, but also the pollution from the exhausts.

“We are not banning HGVs delivering in the local area, we are asking them not to use Henley as a shortcut and to stick to the strategic highway network.”

Air quality campaigner David Dickie, of St Katherine’s Road, Henley, has been a strong advocate of the scheme. As part of his work with Clean Air for Henley, he found a fifth of primary schoolchildren were using inhalers.

A study was carried out by Stantec, an engineering consultancy firm in Caversham, to monitor HGVs last year. It found that of the 151 lorries that entered Henley, 131 went straight through.