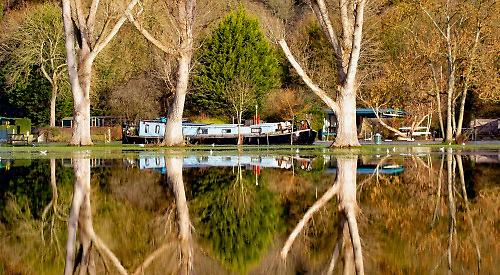 SPORTS pitches in Henley could be at greater risk of flooding if plans to drain surface water from a new housing development are approved.

Taylor Wimpey has scrapped a proposal to drain the water from its development at Thames Farm into Lash Brook in Shiplake after complaints that this would make the village’s flooding problem worse.

The decision is a victory for residents who had fought to expose the failings of the scheme.

But the company’s alternative plan could increase the frequency of flooding downstream at Mill and Marsh Meadows in Henley and even affect the pitches at Jubilee Park.

The Mayor of Henley has vowed to fight the new scheme, saying it is “crazy”.

Taylor Wimpey has planning permission for 95 homes at Thames Farm, a 5.7-hectare plot off the A4155 Reading Road between Shiplake and Henley, which it will rebrand as Regency Place.

It can’t drain excess run-off into underground “soakaways”, as is standard practice, because the chalk bedrock beneath the site is prone to collapsing and creating sinkholes.

It proposed pumping the water along a new pipeline beneath Reading Road, Station Road and Mill Road, then out into Lash Brook on the opposite side of the village.

However, residents of Mill Road said this would exacerbate the flooding problem which forced them to evacuate their homes in late 2013 and 2014 when the street was under water for weeks. The worst flooding since then happened last month when the brook burst its banks and some properties were surrounded by water for several days.

Taylor Wimpey agreed to reconsider after more than 1,000 people signed a petition against the scheme and South Oxfordshire District Council, the planning authority, demanded a full flood risk assessment be carried out.

Now the developer is proposing to pump water along an existing pipe which runs north under Reading Road before heading towards the Thames near the entrance to Sheephouse Farm, on the edge of Henley.

The run-off would enter the river via a short drainage channel beneath the towpath. The farm is immediately south of Jubilee Park, the home of AFC Henley and Henley Hockey Club, where the town council plans to build a new all-weather pitch after selling nearby land for housing.

Enzygo, an environmental consultant hired by Taylor Wimpey, says the increased flood risk here would be “negligible” as the predicted discharge of 30 litres per second would raise water levels by just 1mm.

It admits the previous scheme would have increased the flooding risk in Shiplake because Lash Brook is disjointed with areas of stagnant water and a limited catchment.

With no drainage scheme at all, the water would flood the main road and the homes opposite Thames Farm.

Enzygo says: “The Thames flood plain includes Lash Brook. As such, outfall would be surcharged during a flood and could exacerbate existing and known flooding issues with adjacent properties.

“Run-off would be directed to a watercourse rather than shedding overland through Shiplake and potentially flooding properties.

“Land downstream from the A4155 is currently sports pitches and grassland, therefore the risk from flooding is considered low when compared with property flooding.”

Any drainage scheme must be approved by the district council and Taylor Wimpey has promised to give the community notice before
submitting an application.

Peter Boros, of Reading Road, Shiplake, who led the campaign against the first proposal, said: “We’re delighted that they now agree it’s inappropriate to discharge their drainage here and are considering a different solution that relieves the village entirely.

“Aside from flooding concerns, the prospect of having the main access to Lower Shiplake dug up for months on end was pretty ghastly.

“This seems a far better solution on the face of things, though we still have a lot of analysis to carry out. We enjoy a good working relationship with Taylor Wimpey. They seem to understand in our meetings that, quite frankly, they’ve cocked things up and can’t just run roughshod over the entire community.

“We’re not trying to frustrate this development, despite what some people claim. We accept it’s going ahead but just want to make sure it doesn’t have an adverse impact.”

But Henley Mayor Ken Arlett said he would oppose the new proposal if it increased the flood risk at Jubilee Park.

The retired builder said: “Why would I agree to take floodwater from another parish just to help a property developer?

“Some years ago, we agreed to take overspill from a drainage scheme at the polo club off Reading Road, so we already get extra water coming on to Mill and Marsh Meadows and shouldn’t have to take any more.

“It would be crazy to accept this because we’re looking at building a new state-of-the-art pitch at Jubilee Park. If it was damaged it would cost a fortune to put right.”

Councillor Arlett said the developer could mitigate the flood risk by building a smaller number of properties around a “balancing pond” to absorb overflow.

“It looks like Taylor Wimpey are having one last throw of the dice and while I have limited sympathy, they should look at storing the water on their own land if they’re that desperate to build on it.”

A Taylor Wimpey spokeswoman said: “Following feedback from the local community, we have been working closely with specialist consultants to review a number of alternative drainage strategies for our development off Reading Road, Shiplake.

“We are confident that we have found a viable solution which we presented to the Thames Farm Action Group on February 24.

“We will continue to listen to feedback from the local community and consider all comments received before we finalise and submit our revised strategy to South Oxfordshire District Council at the end of March.”

Thames Farm, on the outskirts of Harpsden parish, wasn’t earmarked for development in the joint Henley and Harpsden neighbourhood plan, which passed a referendum in 2016.

The district council rejected the housing scheme but its decision was overturned in 2018 following a legal challenge by landowner Claire Engbers.

Last week, the Henley Standard reported that the original drainage scheme could pollute the water supply. JBA, a hydrogeological engineering firm hired by the residents, said Taylor Wimpey had failed to show that its plans to inject the chalk bedrock with grout to stop further sinkholes from developing wouldn’t pollute or displace an aquifer which supplies the village’s drinking water via a borehole off Bolney Lane.