Old chapel brought back to life as funeral urns store 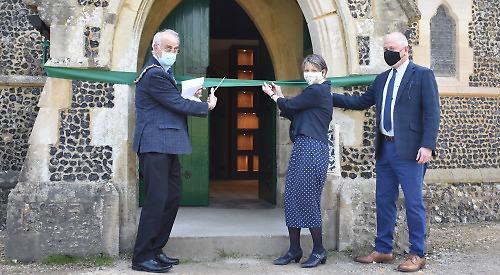 A NEW columbarium has been unveiled at Fairmile Cemetery in Henley after more than three years of planning.

It is housed in a disused chapel, one of two in the cemetery, which was taken over by the town council from South Oxfordshire District Council in 2009.

Councillors agreed to spend £90,000 on repairs and appointed Universal Stone, of Wickford, Essex, to convert the Grade II listed non-conformist chapel into a space for storing funeral urns.

A Victorian fireplace, the chequered floor tiling and the beamed roof have been retained.

Mayor Ken Arlett cut the ribbon at a socially distanced opening ceremony on Monday and welcomed people to view the 220 niches.

Each niche is a hand-crafted hardwood cabinet with a glass front and interior lighting.

There is also a designated seating area for people to sit quietly and remember their loved ones.

The columbarium can only be accessed by a secure door entry system for which a unique code will be allocated to each family.

The niches can be leased for a fixed period of 20 years at a cost of either £1,800 or £1,300 depending on the size. Non-residents will be charged three times as much.

Ashes from any denomination of the Christian faith, or other faiths, are accepted.

Councillor Arlett said: “I remember coming here a few months ago and saw a building that had been left to its own devices. Timber on the roof had gone rotten, flashing had been dislodged, the outside walls were damp, plaster was coming off the walls and the floor needing replacing. It was in a sorry state.

“But with a sympathetic town council to finance the project and architects and builders with many years of experience refurbishing ancient buildings, we now have something to be proud of.”

Liz Jones, the council’s accountant, said she was delighted with the columbarium.

She said: “At the first meeting the council had we discussed all sorts of options with what to do with the building, such as a pet cemetery and residence or office buildings but this was the most suitable. It has given an old building a new reason to breathe. There’s nothing like this in the area. To have something that’s as intimate as this and indoors so you don’t have to worry about the weather is unique.”

He said: “There was a lot of repair work. Different contract work was needed and different materials and it was hard, especially with covid.

“I’m really proud of it. It looks really lovely and that’s the important thing for us.”

The project was managed by specialist architects West Waddy, of Abingdon.

Steve Simkins, a consultant for the firm, said: “This is the first columbarium we’ve done but the restoration of historic buildings is quite regular for us.

“We’ve already been approached by another town council to see if it’s possible to do something similar with their chapel.”

In September, the council agreed the budget for the repairs but an extra £3,000 was needed when the contractor found the damage to the roof was worse than expected.

Further examination of the timber ridge beam showed extensive rotting. The contractor had budgeted only £2,500 for timber repairs so the council negotiated an additional £3,266.

Concerns about the profitability of the columbarium were raised more recently by the Mayor.

Cllr Arlett said he didn’t believe the figures showed a good return on the amount of money the council had invested in the project.

He said a smaller niche would earn £54 a year over 25 years, the original lease period, and suggested the period be cut to 20 years, which the council agreed at a meeting this week.

At the end of the lease period, families will be given the opportunity to have their loved ones’ ashes remain there for a further 20 years.

Councillor Ian Reissman, who chairs the council’s finance strategy and management committee, said: “As it’s a listed building, we have to fund it so it’s a three-way win.

“We saved the building and provided an amenity to the town.”

The niches which will be available for lease from next month. Viewings can be arranged through the cemetery administrator. Call (01491) 576982 or email cemetery
@henleytowncouncil.gov.uk