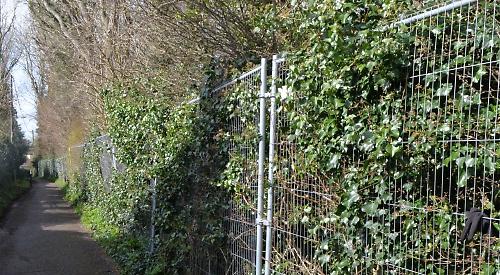 A CAMPAIGN has been launched for a footpath in Watlington to be re-opened.

The path, which runs through a triangle of woods known as Little Orchard or Masons Woods, has been closed to the public for several years.

Tom Bindoff has applied for it to be included on the map of Definitive Rights of Way, which means there would be a legal record of its existence.

He asked for support from Watlington Parish Council but it decided not to become involved.

The current owner says there was never a public right of way through the land and he won’t be opening it up again.

Mr Bindoff, who used to be a parish councillor, told the council: “People have enjoyed using this path for many years, through the woods and across the stream, until it was blocked off.

“It was a way to connect with nature and the only safe way for children to reach a section of the stream where the water is shallow, so it does have a special place for families.

“It was used by a very large number of people for a very long time, certainly more than 20 years. Villagers want this path to be open for future generations to enjoy.”

The access problems began in 2017 when a green plastic boundary fence was erected by the Icknield Way Lodge of the Freemasons, which then owned the land.

Two years later, the area was tidied up and cleared and a steel security fence was put up, preventing the public from accessing it.

The lodge, which bought the land in 1970, said this was to protect pedestrians because it had a duty of care as the landowner and because people had been trespassing. The original fence was said to have been set on fire and the trustees had reported six incidents of malicious damage to the police.

At the time, the parish council asked both South Oxfordshire District Council and Oxfordshire County Council to investigate whether the clearance work was unlawful.

Mr Bindoff told councillors there would be no cost to the council in supporting his claim, adding: “This is purely a question of trying to
re-establish the path.”

“Supporting this petition as a council means we are going against the owner of the land. My view is that we should be neutral on this.

“Anyone who wants to support Tom can sign the petition on their own but as a council we shouldn’t be seen favouring one parishioner’s view over another.”

Mr Bindoff said that if the footpath had legal status the county council, as the highway authority, would be liable for any accidents.

Councillor Tim Horton said the council should not remain neutral.

He said: “I want to support Tom on this. This has been an extremely well-used path and we should have backed this up as a council.” Council chairman Matt Reid said the council had to be “diplomatic” and remain neutral because of the risk of being seen to show favouritism.

Vice-chairman Ian Hill said he did not want to “fight” the owner, adding: “We run the risk of not getting any access to the land at all.”

“The main issue is getting the fence down — the path is currently locked away.

“I think the best way is to try to persuade them to take the fence down and let the dust settle.”

Councillor Terry Jackson said: “I want this fence down more than anyone — maybe the owner would do it if they were told by an expert.”

The council decided not to support Mr Bindoff’s application, which he has now submitted to Oxfordshire County Council.

In order for the path to be included on the map of Definitive Rights of Way, there must be evidence that it has been used by the public for at least 20 years.

Mr Bindoff said that about 20 residents had filled in the necessary evidence form, confirming that they had used the path for the required period.

In 2019, the lodge said: “We have the signatures of 45 people between 60 and 100 years of age who were born, bred and still live in Watlington, who have signed to say that there never was a public right of way across the land.”