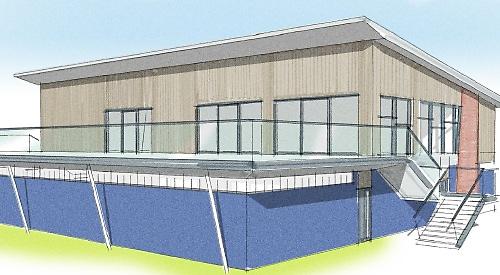 PLANS to build a new headquarters for two Henley sports clubs by selling their existing premises for housing have been put on hold because they aren’t financially viable.

The town council, which owns AFC Henley and Henley Hockey Club’s base off Reading Road, has been discussing the multi-
million pound scheme for almost a decade but has now said it would create a “significant deficit” in its budget.

It earmarked the land for about 30 homes and up to 200 sq m of retail space in the Henley and Harpsden neighbourhood plan, which was published in 2016.

Proceeds from the sale were set to fund a new shared clubhouse overlooking the Jubilee Park sports fields across the road, which the council also owns. Its contractors proposed a two-storey building with changing rooms, toilets, showers, storage areas and a first-floor social area with kitchens and a bar plus a viewing deck. During public consultations in 2019, this was said to cost up to £2.4 million.

The council also wanted to build an all-weather artificial pitch for up to £1.2 million and a £720,000 depot for the council’s parks services team. The new housing development, for which T A Fisher was named developer in 2017, would have comprised at least 40 per cent “affordable” homes.

However, in talks held in private earlier this month, the council said it would lose money on the deal as the price of labour and materials had gone up more than expected.

The final straw came when the Oxfordshire Football Association, Sport England and the Football Foundation all said they wouldn’t fund the project because it was too ambitious.

The council still wants to go ahead, probably with a smaller scheme, and is now talking with the clubs and building contractors about the next step.

It could seek funding and planning permission for the artificial pitch separately and seek to move its parks team elsewhere.

The council says it has learned from previous negotiations and its assessments of the clubs’ needs, which will help it draw up a replacement plan.

The existing site will remain earmarked for housing in the new neighbourhood plan, which the council is currently drafting.

Henley Mayor Ken Arlett, who chairs the plan working group, said the problem had been apparent for some time. He and his colleagues kept proposing revisions to bring the cost down but they had to stop once they knew it wouldn’t get funding.

Cllr Arlett, a retired builder, said the problem was the grant bodies wanted the new building to be reduced in size but wouldn’t say by how much.

He continued: “We also needed to move the parks department and, without grants, the figures didn’t work as we’d have made a loss and not the small profit that was originally expected.

“We couldn’t think of a way to shrink it down while including everything the clubs needed, so we’ve got to take a few months to regroup and consider our options.

“This could take another year to resolve or it could take a couple of years. It’s too soon to say but we’re confident that we can build on the work we’ve done up to this point.

“Nobody’s to blame for this. We thought it would all click into place but builders’ costs have being spiralling by between seven and 10 per cent annually, which hasn’t helped.We only met the FA a few months ago and perhaps we should have spent more time with them before that, but this is a one-off project and it’s easy to recognise in hindsight.

“We’re very thankful to everyone who has been involved and appreciate that they’ve put a lot of effort into getting this far. The developer has been brilliant and councillors and officers have spent many hours on it.

“It’s a shame that we can’t go any further but we still want to achieve the goals of this project in an effective and financially viable way.”

Trevor Howell, chairman of AFC Henley, said he was disappointed as he had been involved in talks since 2012, when work on the neighbourhood plan started. He said: “I’m pretty angry as we’ve been talking about this for nine years.

“It’s a shame it doesn’t hang together financially, though it’s a mystery why this has only just come up.

“Perhaps it was always an impossible dream to squeeze that much on to Jubilee Park with whatever the developer was willing to pay for the land, particularly without external funding.

“On top of everything else, the council had to find 70 car parking spaces and install new services, which is a hell of an undertaking to satisfy two sports clubs.”

Mr Howell said his players, many of whom are children, rarely used the existing clubhouse because it is too far from the pitches and across a busy road so the council should propose an alternative.

“On paper we’ve got a bar, kitchen and four changing rooms but nothing’s fit for purpose because we’re so far from the pitches,” he said. “The furthest is more than 200 yards away so we’ve always got the burger van on match days because we can’t even have a café.

“I’d hope the council could at least provide toilets so we don’t have to escort people back across the road.”

“We were never party to any figures but I believe they started low and just got bigger. I guess the maths didn’t work but you could ask why no one noticed that sooner.

“The new clubhouse would have been nice but the one we’ve got is in good shape as we’ve looked after it. The town council clearly needs time to consider its next steps so we’re leaving the ball in its court.”

The Reading Road site is the largest piece of suitable development land owned by the council, which says it is outdated and needs replacing.

It hasn’t disclosed its value but sold the neighbouring four acres of land to Tesco for £4million in the early Nineties.