Decision on HGVs ban put back after ‘emotional’ meeting 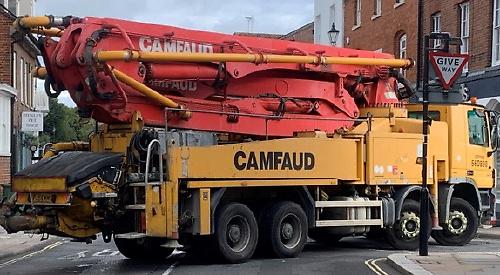 PLANS to stop heavy goods vehicles from using Henley as a “rat run” have been held up.

A motion calling for a 7.5-tonne weight limit on Henley Bridge was not put to a vote at last week’s meeting of Oxfordshire County Council, the highways authority, as planned.

The meeting was cut short after members considered a separate motion on domestic abuse and were then said to be unfit to continue due to the emotional debate.

There were fears that the motion would not be considered until the middle of next month due to the county council elections on Thursday, May 6.

However, the council has now called an extraordinary meeting on Wednesday to consider the motion and six others that also missed out.

Stefan Gawrysiak, a town councillor who also represents Henley on the county council, was due to put forward the motion.

He said he was disappointed by the delay but ending the meeting was the right thing to do and he was confident that the motion would be supported next week.

Councillor Gawrysiak said: “I had done an enormous amount of preparation with the group leaders. I am absolutely convinced that it would have gone through because I definitely had enough votes lined up.”

Cllr Gawrysiak has been working with residents Amanda Chumas and David Dickie on a campaign for the ban, saying it would help reduce pollution levels in Henley, which are already above World Health Organisation limits. They also say it would improve the safety of pedestrians and prevent damage to the town’s roads and historic buildings.

More than 2,500 have signed a petition in support of the campaign.

It would cost about £120,000 to introduce the weight limit, which would be monitored using automatic number plate recognition.

During the council meeting, Councillor Deborah McIlveen asked colleagues to ensure there was adequate support for victims of domestic violence locally and to campaign for increased funding from the Government.

Cllr Gawrysiak said: “The meeting started at 10am and went on until 3pm. It took a turn of events that I have never seen before.

“The motion was principled and measured but it was a highly emotional debate with four councillors speaking movingly about their own experiences.

“They spoke very bravely about the domestic violence they had experienced. Three of these were about fathers beating up their mothers and there was a councillor who was attacked by her husband. As you can imagine, this was a very traumatic 20 minutes of debate.

“The indications are that during covid it has got much worse. The motion was to make sure we had all the funding in place for all the support services. I have given £1,600 of my county councillor grant to Nomad so that they can train their workers in domestic violence counselling.

“At the end of the debate the council was very raw and emotional. There were many councillors in tears.

“The motion was passed unanimously and it was the right decision to cancel the rest of the business. Councillors were not in a fit state of mind to do further work.”

Cllr Gawrysiak said he would use the extra time to gather more support for the campaign. He has already received support from South Oxfordshire District Council, of which he is also a member, while parish councils from Bix and Assendon, Nettlebed, Kidmore End and Sonning Common have indicated their support.

The traffic regulation order would apply within a five-mile radius of Henley to include villages along the B481, which leads south off the M40 through Christmas Common and Nettlebed towards Henley.

Mrs Chumas, who lives in Bell Street, told the Henley Standard: “This campaign hasn’t gone away and it isn’t going to do. We intend to follow it through.

“I started this because of the continuing concern with pedestrian safety and what I witness on a daily basis. The corner of New Street and Bell Street is not the only blackspot and many other areas of Henley are affected. It is something that should concern everybody.” Meanwhile, Cllr Gawrysiak has been accused of leaving it too late to put his motion to the council.

The criticism was made by Paul Harrison, who will be standing against him in Henley for the Conservatives at the elections.

Mr Harrison, who has called for a trial of a night-time ban on HGVs, said: “Four years ago at his election, he said his priority as a county councillor was to restrict HGV through-traffic and implement a 7.5-tonne weight limit.

“He has waited until the very last meeting of the full council before the elections, so why has it taken so long? I would have put it in as my very first motion.

“I do query his commitment. Is it just a convenient badge to use for an election?”

Cllr Gawrysiak replied: “Before I was elected, the previous Conservative county councillor for 12 years brought nothing to the table.

“I have gathered the evidence on air quality, worked closely with Amanda Chumas and David Dickie on the HGV campaign and successfully took a motion to South Oxfordshire District Council for the weight limit.

“I will continue to push for the weight limit before and after the election. I have had meetings with county council officers and Stantec, the traffic consultancy firm in Caversham, as to what evidence we need for it to be implemented.

“Paul Harrison, from Sonning Common, is supporting a ban at night when there are no people on the streets, so the pollution from the HGVs is not going to harm anyone.”