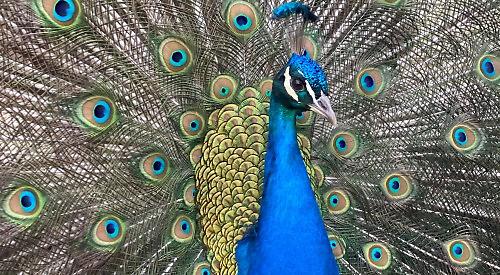 VILLAGERS are fighting plans to remove wild peacocks which have been living in nearby woodland for decades.

Some of the 17 or so birds are to be removed from the land at Beech Lane, Woodcote, by South Oxfordshire District Council, after it received four complaints from residents about the noise they make.

Environmental health officers have instructed a gamekeeper to catch them and move them to another unidentified location.

However, many other residents say the peacocks are a much-loved part of community life and should remain.

The birds are believed to be descended from a smaller group that escaped from their owner more than 30 years ago.

Most villagers say they aren’t bothered by their high-pitched mating cries, which mostly happen at sunrise in spring and summer, and they enjoy seeing them wandering around during the day.

The birds spend much of their time in the back garden of Amanda Stewart, whose home backs on to the woods, so initially the council wrongly assumed that she was their owner. It wrote to her to say she must keep them under control and warned that officers might visit her if reports of “excessive peacock calling” persisted because neighbours had complained about being woken up.

The council said there were about 12 males and five females so the males were competing and Mrs Stewart should reduce their number to form a “lek” of one male and up to five females.

One neighbour said the birds would stomp loudly on their roof from as early as 2am and they had attempted to “peacock-proof” the property but were still suffering damage.

Mrs Stewart, who has lived in Beech Lane for 20 years, replied that the birds were wild so the council asked whether the gamekeeper could come on her land to trap them.

She agreed but when she announced the news on Facebook, there was a flurry of complaints from villagers who pledged to write to the council urging it to back down.

Mrs Stewart says the peacocks often enter her land to take food she puts out for her chickens, which she cannot prevent, and they have frequently saved her flock from predators by sounding an alarm call.

They include two “regulars” who are of a similar appearance, which she has nicknamed William and Harry, while others come and go.

Mrs Stewart said: “My announcement seems to have really put the cat among the pigeons, or rather the peacocks.

“I thought people would wonder where they’d gone so I put up a post explaining it was ‘time to say goodbye’ and had no idea there’d be such a strong response. I believe there were five birds in the woods originally but over the years they’ve bred and are now happily living there. They roost in the trees and are essentially wild with no owner.

“People almost think of them as ‘village pets’ and while I can’t deny they’re noisy, it’s part and parcel of country living.

“I used to live off the Hanger Lane gyratory in London and if you can put up with that, the odd cry shouldn’t be difficult.

“They’re a very useful ‘alarm’ for predators and they’ll make a lot of noise if they hear a fox coming. We’ve never lost any hens in all the time I’ve been here.

“They’re stunning, adorable birds and so tame, as well as a bit dim.

“I’m not sure how the council can take such drastic steps as I don’t think they’ve been out to visit or taken any noise recordings.

“Everybody here loves the birds and would hate to see them come to any harm. If I thought that was going to happen, I’d steal them and run away with them myself. It’s so emotive that the Facebook page administrators had to close comments because they were getting so personal.

“People were asking how anyone could dare move to the countryside, then complain about wildlife making noise.

“We have to contend with far louder creatures like muntjac and foxes so I’m not sure why this should be a problem.”

Mrs Stewart’s neighbour Christine Moreland, whose father Bob Warren is a gamekeeper in Ewelme, said: “I’ve been here 30 years and the peacocks have always been here.

“It started with four beautiful blue ones and two whites. They have them in Ewelme without any problems.

“Their noise never lasts long and it’s far less distressing than the screams of foxes or deer.

“We’re utterly devastated by this and don’t understand how a complaint can force such drastic action without wider consultation.

“The peacocks travel everywhere in the village in the daytime and then go home to roost so they don’t bother anyone. They’re magnificent animals and we shouldn’t be interfering.” Mrs Stewart’s online post sparked more than 100 supportive comments.

One said: “It’s such an utter shame. Yes, they’re a bit noisy, but they are so well-loved. I wonder if we can get the madness overturned? Bet the humans who complained are much louder.”

Another said: “As for the extra noise, we figured what with it being mating season they deserved an extra squawk or two here and there.”

But one villager supported the complainants, saying: “The peacocks appeared about five years ago and before that weren’t a staple of life on Beech Lane... their numbers will only grow.

“No one is saying all of them should go but maybe there should be some control on how many.

“Proximity to the noise they make is important. If you live across the village and only hear the slightest noise, you’ll have a vastly different opinion from someone whose garden they roost in.”

A spokesman said: “The residents say the birds have caused damage to property and that the loud noise they make, starting in the early hours of the morning and continuing throughout the day, is both annoying and causing them to have regular sleep disturbance. We are in discussions with their alleged owners, with the aim of relocating some of the birds away from the area.

“However, there are absolutely no plans to cull any of the birds.

“Local residents are urged not to feed the birds as doing so risks further damage to people’s property and discourages them from returning back to the nearby woodland.”