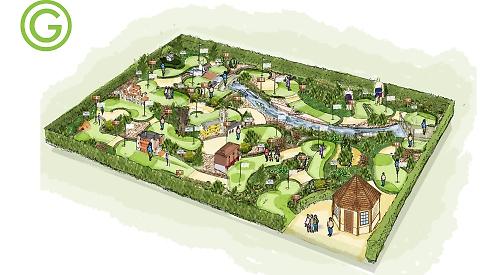 A NEW adventure golf course in Henley could be themed around a tour of the town, including a water feature representing the River Thames.

The town council wants to transform the putting green in Mill Meadows into a miniature 18-hole course at a cost of up to £250,000.

Its recreation and amenities committee has recommended putting aside funds for the project, which was suggested by a working group.

A business case presented to a council meeting included predicted revenue, a timetable for the building work and potential designs.

The holes could include homages to the Kenton Theatre in New Street, the town hall in Market Place, St Mary’s Church in Hart Street and a guitar-shaped hole with different coloured grass to represent George Harrison’s Stratocaster.

A photo opportunity could also be included at the 16th hole with either a statue or 2D board of Olympic rowing champions Sir Matthew Pinsent and Sir Steve Redgrave.

The statue would depict the pair in their Olympic tracksuits with medals around their necks sitting on a park bench so people could sit between them for a photo.

The council would need the athletes’ permission for this so the second option would be a full-sized 2D board with their faces removed to allow people to have their photos with their faces in the holes.

The course could also have a kiosk which would mimic the design of a boathouse, information boards for each landmark and benches and bridges over the mini River Thames which would run through the course.

Artificial grass 1cm long would be used for the putting surface and 35mm long for the areas surrounding the holes.

The designs were put together by Greenspan Projects, of Southampton, who estimated the work would cost £255,940. The council says the attraction would pay for itself within four years and then provide a profit of about £60,000 per year thereafter.

Councillors unanimously approved the project in principle and a public consultation will take place next month.

The final decision will be made in July. If approved, work could start in October with an estimated completion date of January.

Councillor Laurence Plant told the meeting: “I think it’s a great idea. I was in Marlow and they have got a very a basic and temporary putting course and there were queues of people waiting to use it.

“There was scepticism about whether or not it will work but I seriously think it will.”

Councillor Glen Lambert said: “I was certainly one of those who was sceptical but flicking through these designs and seeing how they have evolved and the celebration of Henley that they are, I am falling in love with it.”

Councillor Ian Reissmann said: “I also shared some concerns that we were spending a lot of money but I’m really pleased to see that with the help of the town clerk’s research, the finances are looking very promising and I’m now a big supporter of this scheme.”

The 1,210 sq m putting green, which is next to the bowling green and surrounded by a hedge, has been shut since 2018 following the closure of the information kiosk at the nearby Leichlingen pavilion.

This was used to hire out the putters, balls and scoring cards during the summer season but the town council opted not to open it last year to save about £7,000 in staff costs.

The nearby Piazza Café offered to hire out the golf equipment in exchange for having a pop-up cabin beside the green but councillors didn’t want to have a business operating on the site.

The council has since ruled out other options, including retaining the putting green and using the area as a forest school or community space.

The business case identified some of the issues that may arise with investing in the golf course as being a lack of support, demand and parking. There are also risks of vandalism and unexpected closures.

However, councillors believe it would be a “community asset” and would have only a “marginal” impact on the meadows car park.