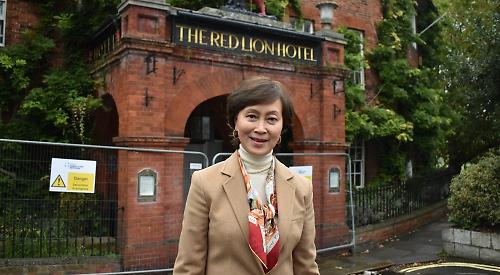 THE new owner of the former Red Lion Hotel in Henley wants to carry out repairs to the exterior of the historic building.

Grace Leo has applied for planning permission and listed building consent to give the west elevation of the Red Lion Stables a traditional three-coat lime render.

She says this is needed to stabilise and improve the appearance of the elevation, which has fallen into “considerable disrepair” over the years. Redundant surface wiring and plumbing would also be removed where possible.

The courtyard surface would be repaired and the outdoor dining area repaved.

The scheme would also involve general landscaping in the courtyard, replacing the existing raised planters, planting small decorative trees and creating a kitchen garden with small raised beds as well as constructing a timber pergola and covered walkway.

The application submitted to South Oxfordshire District Council, the planning authority, says: “The proposed works will preserve the character and appearance of the Henley conservation area.

“The rendering of the west elevation of the stables will obscure evidence of its multiphase development.

“The remedial work involved in the traditional lime rendering, including removal of unsightly cabling, services and harmful cement repairs, will have a positive impact on the fabric of the building. The appearance of this elevation will be much improved.

“The proposed rendering, pergola and covered walkway would not have any appreciable impact on the significance of the Grade II listed hotel and stables, nor on the setting of any heritage assets.

“The erection of the freestanding pergola and walkway will not physically affect any listed buildings.

“The structures will be within the setting of the hotel and the Chantry House. The yard at present is entirely utilitarian, reflecting its use as the service area of the hotel.

“With the change in ownership and character of the hotel, the external areas are being given higher status and treated as an operational part of the hotel.”

The hotel, which is on the corner of Hart Street and Thames Side and dates back to 1632, was bought last year by Ms Leo, an international hotelier, and Singapore-based shipping entrepreneur, bought it with hotel investor Tim Hartnoll.

The interior is being refurbished in time for the re-opening of the hotel as the Relais Henley in time for Henley Royal Regatta in August. Permission for the refurbishment of bedrooms and bathrooms, relocation of the dining area and decoration of communal areas was granted in March.

A public consultation on the latest proposals will run until June 5 and the council is due to make a decision by June 21.