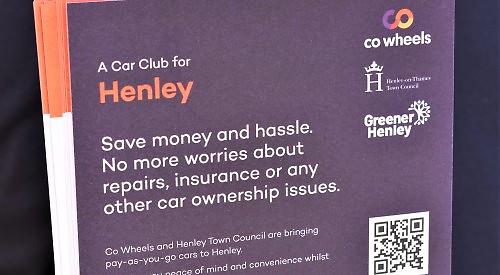 A CAR club in Henley has attracted 10 members since its launch.

Co-Wheels, which is providing the pay-as-you-go service, says this is a promising start and usage should increase once leaflets are sent to every household next week.

The club could receive a further boost as one of the cars is set to be moved to a more prominent location in a new bay near the entrance to Gibbs & Dandy in Reading Road.

The bay has to be approved by Oxfordshire County Council, the highways authority.

The town council is spending up to £23,982 plus VAT on half the cost of a two-year contract with Co-Wheels.

South Oxfordshire District Council has agreed in principle to pay the remaining cost and it’s hoped that after two years there will be enough members for the club to sustain itself.

A third or fourth vehicle could be added if there is sufficient demand. It’s hoped that the cars will be fully electric but this would depend on more charging points being available.

In parts of Henley, levels of harmful nitrogen dioxide and fuel particulates have been well above Air Quality England’s safe limit for more than a decade.

Stefan Gawrysiak, a town, district and county councillor. said: “It’s early days and we’re still pursuing a second space on Reading Road but the figures are pleasing and I’m confident it will become self-sufficient.

“It’s a definite winner for people without a car as they can hire one and pop off without having to consider insurance or maintaining it.

“We have data showing that two-car households might give one up and hire from the club occasionally instead.

“In a few years, it’ll be even more environmentally friendly as we’ll have fully electric cars and the more we have, the more people will want to use it. There will be an upward spiral as its profile grows.”

Dave McEwen, chairman of the Greener Henley environmental group, said: “We thought it would be slow to take off but it has done surprisingly well.

“We’re lucky to be a ‘front-runner’ as a small town because these schemes tend to focus on more urban areas.

“Co-Wheels believes anyone driving fewer than 6,000 miles a year can benefit, so that includes a lot of people who wouldn’t have to think about insurance, repairs, MOTs or servicing.

Parking is also a big problem in central Henley but if you make the switch, you no longer have to worry about finding a space.

“I’m hopeful that a third car will come within six months, ideally electric, and in the next five years we’d love to see a wide range of cars around town so residents are never more than five or 10 minutes’ walk from one.

“Each car club vehicle could replace up to six privately-owned ones, so it will tackle several related problems at once.” Jonathan Collinson, business development manager for Co-Wheels, said: “Henley ticked a lot of boxes for us, including having the support of an environmental group, so we were pleased to take this opportunity.

“It has been a relatively ‘soft’ launch but these things rarely hit the ground running and are generally promoted by word of mouth.

“We’re constantly monitoring usage so there’s no set date for rolling out another car — that’ll happen whenever demand supports it.”

The scheme entails a £25 one-off joining fee and then a monthly membership fee of £5. Cars are hired at market rates, currently £5.50 per hour or £38 for 24 hours, plus a further 18p charge per mile.