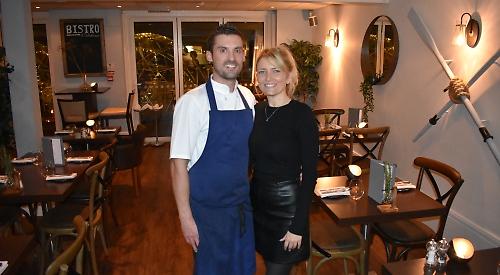 A CHEF and restaurateur in Henley is delighted after being allowed to serve food outside.

Shaun Dickens, who runs the Bistro at the Boathouse in Station Road, already had permission to serve drinks to customers outside between 6pm and 9pm.

Now he has had a request to serve food in the same period approved by South Oxfordshire District Council, the planning authority, despite opposition from some neighbours.

Mr Dickens and his wife Gemma, who works front of house, hoped the move would attract more customers and help the business to recover from the effects of the coronavirus pandemic.

The restaurant offered a takeaway service during lockdown and re-opened for outdoor dining on April 12 when the covid restrictions allowed.

In the first week after permission was granted, all 18 tables outside were busy all the time. Twelve are on the decking on the river side of the restaurant and the other six are in Station Road. Between them, they provide space for 80 to 90 covers.

Mr Dickens said: “From Monday to Sunday, not a single table was spare from 6pm to 9pm and the customers were really grateful to have that opportunity.

“They also had the option to come inside and finish their drinks when it reached 9pm — we were keen to stick to the rules.

“We are really happy as it has made such a dramatic difference to the business. I wouldn’t say it is the final step but if you are a riverside restaurant, it is such an important asset for us to have.

“Not only is it important to be able to eat outside during these covid times, but we have one of the most beautiful spots in Henley by the river.”

Henley town councillors supported the restaurant’s application, saying it was important to back businesses that were trying to recover after a tough year.

Neighbours objected, fearing it would result in an increase in noise during the evenings.

Barry Reuter, of Boathouse Reach, said it would not be “practical” to ask diners to return to the restaurant at 9pm when they may be halfway through their food.

He said: “Next the application will be for dinners on the terrace up until midnight, then the property could be leased to an even noisier business.”

Another resident, who lives in Station Road, said it would be unneighbourly and have an adverse effect on the local area.

But Mark Rowberry, also of Station Road, supported the restaurant.

He said: “This objection is wholly unreasonable. This business has become an established and highly reputed pillar of the dining industry in our area.

“Like any other business, it has been ravaged by the effects of covid-19 and needs all the flexibility at our collective disposal in order to recover and thrive once more.” Mr Dickens said: “I understand where people like Barry are coming from.

“To be fair to him, we had a long chat about it and he said he had no problem with me. He said we run a great business and the customers are no problem.

“I think his concern is what will happen if we leave the property and it is taken over by someone else who is not as respectful of the neighbours. He has wished us well and said he hopes the permission will be the boost we need.

“People come for the good view and during the day, with the Hobbs boats out on the river.

“There is a sense of hustle and bustle with it being a tourist hub, but it does get quieter in the evenings.”

In 2017, Mr and Mrs Dickens won permission to extend the opening hours of the outdoor terrace and were allowed to use the decked area overlooking the river until 9pm to serve pre-dinner drinks.

Previously they were not allowed to use it after 6pm under the planning permission granted when the former boathouse was first turned into a restaurant in 2008 to prevent residents of Boathouse Reach being disturbed.

Mr Dickens claimed the restriction had cost him trade.