Woman complains about roadworks taking place outside her home in evening 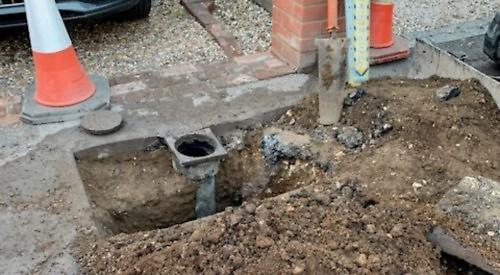 A WOMAN is upset after a broadband provider completed roadworks outside her home in Shiplake at night.

Maggie Edwards, of Station Road, had to move from her bedroom because of the noise from the work being carried out in the street by Airband from 7pm to 2am.

The workmen were drilling a hole right outside her home and had blocked her car in so she feared that if she needed to go to hospital she wouldn’t have been able to get out.

Mrs Edwards later contacted the Oxfordshire County Council, the highways authority, to ask why she and other residents hadn’t been warned about the work.

She said: “I first noticed the roof of a digger when I was in the garden.

“There was a chap on his own and I asked what he was doing there as he’d painted a mark on the pavement near my water drain. He started digging and it just got busier and busier and my neighbour couldn’t get into her driveway and we didn’t know how long it was going to take.

“They said a few hours and I was thinking, ‘but why now at night instead of waiting until the morning?’ They were gone at about 2am and I contacted Thames Water in case they had damaged anything. We also contacted the parish council and the clerk was really helpful.”

Mrs Edwards thought the work had been completed but it restarted two days later.

She said: “Lo and behold, two vans showed up again and no emergency vehicles were able to fit through and my neighbour asked them to move as it wasn’t safe.

“There was a big lorry parked right on the corner of the pavement just where the coach parks to pick the children up from school. They did move eventually and put up signs and traffic lights.”

Mrs Edwards said she spoke to Airband who denied that it was the company’s responsibility to warn residents about the work and she would need to contact the county council. “It was inconsiderate,” she said. “I was just trying to find out why people around here weren’t warned about it.

“I know Airband have a permit to do the work and the workmen were pleasant enough.

“I think it does fall on the council. I did write to them but they didn’t address it at all. They said I needed to contact Airband.

“I’m going to email them again because I just think I’ve been fobbed off. It’s just a breakdown in communication and sometimes I have grandchildren staying over so it’s lucky they weren’t here.”

A council spokeswoman said Airband had spoken to Mrs Edwards about the work before it started.

She said it had to be done in the evening because Station Road is on the approach to Shiplake station and working in the daytime would have caused “significant” disruption during a peak period.