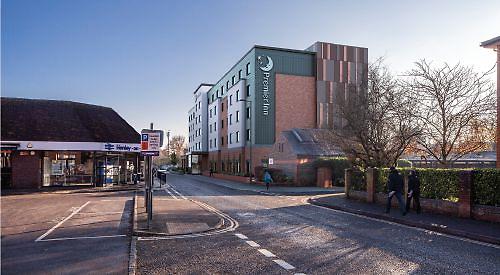 PLANS for a five-storey hotel at Henley station car park have been recommended for refusal.

Henley Town Council’s planning committee says the proposed Premier Inn, which would have 115 rooms with a restaurant, is far too big and out of keeping with its surroundings.

At a meeting on Tuesday last week, members warned it would bring more traffic to the town’s medieval streets, which are already congested, and echoed neighbours’ concerns that it would dwarf their homes.

They have urged South Oxfordshire District Council to turn it down and say it must be “called in” for debate by the authority’s planning committee and not decided by officers.

The application has been submitted by Blocwork, a partnership between the landowner Network Rail and developer Bloc Group, of London.

At last week’s meeting, councillors criticised the partnership and Premier Inn’s owner Whitbread for not sending representatives to answer their questions. Councillor Michelle Thomas, the committee chairwoman, said this showed a “total disregard” for the community.

Her colleagues said Blocwork hadn’t listened to criticisms of the scheme, which was first unveiled in December, as it had barely been revised since then.

They said the loss of about 60 parking spaces on the hotel footprint would cause problems on surrounding roads although Blocwork will provide 12 more elsewhere and Network Rail insists the old ones, many of which are currently leased to nearby businesses, aren’t needed.

Councillor Laurence Plant said: “Numerous members of this chamber have sat with Blocwork on multiple occasions and given plenty of feedback which has been completely ignored.

“We have to reject this on pretty much every available ground — it’s unneighbourly, totally out of keeping with the street scene and the lack of parking is tragic considering we have a shortage.

Councillor Rob Romans said: “This application is shoddy, ill-conceived and quite frankly arrogant. They just want to dump a giant concrete block in the middle of Henley with no regard for its people.”

Henley Mayor Sarah Miller said: “This is a very ugly building, totally out of character and overbearing — I wouldn’t want to look out of my window and see that.”

Councillor Donna Crook said the loss of parking space would force more cars on to surrounding streets including Quebec Road.

Councillor Ian Reissmann said: “Apart from the possible economic development, there’s just so much going against this. It couldn’t be uglier if they’d tried.”

Councillor Thomas said Blocwork was proposing 115 beds for a town of 11,600 people while the Premier Inn at Maidenhead, whose population is seven times greater, has 124 beds and the High Wycombe branch has just 108 beds for 125,000 people.

She said: “The scale is entirely out of proportion. We don’t have infrastructure like roundabouts, ring roads or dual carriageways and cannot cope with a development of this size.”

Russell Challis, whose family live behind the site in Wyndale Close, told the committee that the development would worsen an existing problem with flooding during heavy rain.

Julian Brookes, of the Henley Society, said: “The applicant states that Henley is recognised as a picturesque visitor destination with natural attractions.

“But if you destroy the very reasons that people come to visit in the first place, you’ll have no need for additional accommodation and it will damage existing businesses.”

Premier Inn, which is the largest hotel chain in the UK, says the hotel would add £1.9 million a year to Henley’s local economy, including £975,000 to be spent in restaurants, shops and local businesses.

It believes occupancy would be high all year round and says the site is already “urban” in character.

The company says it has presented the plans to the town council on two previous occasions and wasn’t invited to the most recent meeting.

Network Rail says the scheme will allow the creation of 55 new places at Twyford station, the terminus of the Henley branch line, where there is currently a shortage, and possibly more at Goring and Wargrave.

Dozens of residents have also objected, including the Wyndale Close Residents’ Association, and the district council will make the final decision by September 6.

A Blocwork spokesman said the height wasn't inappropriate as there are nearby buildings up to four storeys tall while the hotel's top floor would be set back to reduce the impact and the building materials would "soften" its appearance.