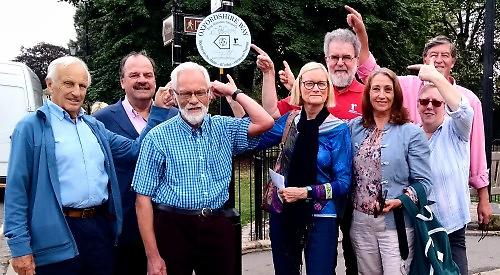 A NEW sign has been installed at Henley Bridge to mark one end of the Oxfordshire Way.

It was unveiled on Monday by Henley Mayor Sarah Miller during a short ceremony attended by members of local ramblers groups and town councillors.

The sign was initiated by Walkers are Welcome Henley and paid for by Oxfordshire Ramblers.

A similar sign has been installed in Bourton-on-the-Water in the Cotswolds at the other end of the
64-mile route.

The Ramblers received a letter from Kevin Rodd, 47, from Kirtlington, near Bicester, saying he had completed the walk but was disappointed not to find a sign in Henley.

Alie Hagedoorn, of Henley and Goring Ramblers, said: “After we received Kevin’s letter three years ago, we started to talk to the town council about what would be the best place for the sign.

“We thought this side of the bridge would provide a good photo opportunity for people completing the walk and wanting to mark the occasion.”

Mr Rodd said: “I wanted to set myself a challenge — I used to walk a lot as a kid and the Oxfordshire Way was quite close to me so I thought it was doable. I walked the 67 miles in two weekends and when I came to Henley I was a bit disappointed that I couldn’t take a good picture at the end.

“With the sign in place, people now know that the Oxfordshire Way is and hopefully it will encourage them to discover it and along with it some beautiful wildlife and countryside.”

The Oxfordshire Way passes from the Cotswolds to the Chiltern Hills, with hilly sections towards each end and gentler country in the middle sections. It takes between four and six days to walk.