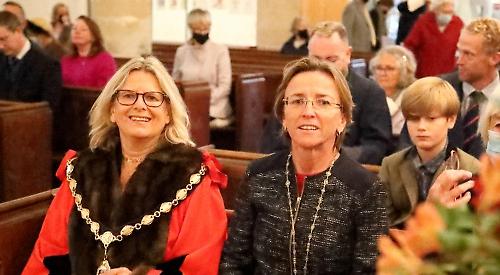 PRAYERS were said for Sir David Amess at the Henley civic service on Sunday.

This took place less than 48 hours after the Conservative MP was stabbed to death during a surgery in his Southend constituency.

The service was held at St Mary’s Church in Hart Street and was preceded by a procession of councillors and dignitaries in their ceremonial robes from the town hall.

The procession was led by town sergeant James Churchill-Coleman holding the mace, followed by the Mayor Sarah Miller accompanied by the Mayor’s cadet Lance Corporal Grace Iveson, 16, who wore her army cadet uniform.

At the church they were met by the Mayor’s partner Carolyn Ahara and their 10-year-old twin daughters Vivien and Ruby and Father Jeremy Tayler, the rector of St Mary’s.

Prayers were said for the Mayor and councillors and for Sir David, 69, who was a father-of-five and had served as an MP in Essex for 38 years.

In his sermon, Father Jeremy said: “Leadership and service increasingly comes at a cost. In this country, those in power must be available, accessible and on the same level as those we serve. We are expected to be seen in the supermarket, the pub and at the school gate.

“Anyone who stands for anything at all will have their detractors and that’s an important part of the democracy of our nation.

“However, there will always be those motivated by hate and violence. Jesus had to face hatred and violence in the cruellest way. But it is the resurrection and the glory of God that we remember.” Father Jeremy also spoke of the difficulties of the coronavirus pandemic and about increasing authoritarianism around the world.

But he said that on a local level there were many reasons to be hopeful, citing the way the community came together during the pandemic. He said that those with positions of power must remain humble and honest.

The service included a performance of Lean On Me by the Reading Community Gospel Choir, who were invited by Cllr Miller, and finished with the national anthem.