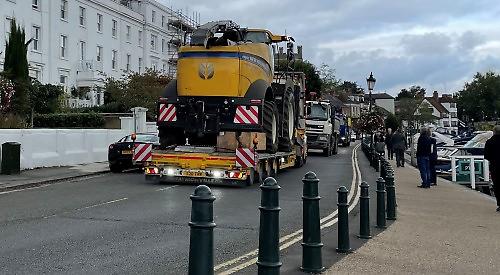 A TRANSPORT company has apologised after one of its heavy goods vehicles caused traffic congestion in Henley.

The T H White lorry was carrying a forager machine from a nearby farm through the town on Wednesday morning last week.

The driver was travelling along Thames Side towards Henley Bridge and turned left into Friday Street before having to reverse as far as the Station Road junction with Reading Road.

He had to be helped by police to reverse along Thames Side, causing traffic to build up in both directions.

A woman eyewitness, who took these pictures, said: “The driver said, ‘The sat-nav took me through this way, it’s not my fault’.

“I feel drivers should be preparing their route before making their
journey.”

The company has apologised for causing an inconvenience but says the driver had used the safest route available.

A spokesman said: “We were collecting the forager from a farm where it had been supporting a breakdown during the maize harvest.

“The agricultural division director had spoken to our driver regarding his route prior to him leaving the farm as he was concerned about the options he had.

“The first option would have taken him via a low bridge, meaning he would have had to stop and unload the forager on the road, drive the truck and trailer under the bridge, follow on with the forager and then reload on the other side, which would have caused a considerable blockage on this route and lengthy delays.

“The second option was to take the route directly through Henley but with the potential issue of taking the load through a built-up area.

“On this occasion the route selected did cause some disruption in Henley but we believe that it was still the correct and safest course of action to take. The police supported our driver while he reversed along the road prior to him being able to successfully navigate through and away from Henley.

“We apologise sincerely to anyone inconvenienced by this but we have no control over where farms are sited, or the available routes to get to them, which are often roads that were not designed with modern agricultural machinery in mind.”

The incident will reignite the campaign to stop large lorries using Henley as a short cut.

Henley town, district and county councillor Stefan Gawrysiak had a motion approved by Oxfordshire County Council, the highways authority, in April calling for a
7.5-tonne weight limit on Henley Bridge. Council officers are now compiling a report on the likely effect of the restriction.

Cllr Gawrysiak said: “This document will be subject to discussion at the transport and strategy committee in early November.

“The aim is to reduce the number of ‘through’ HGVs in Henley. They should not be coming through the town but staying on the strategic highway network.”

The Halcrow map for freight traffic indicates that Henley’s main roads are suitable for “local access only” while the town itself is considered “unsuitable” for through lorries. Instead, HGV drivers are encouraged to use the M4, M40, A34 and A40 for such journeys.

Cllr Gawrysiak said this advice was being “widely ignored”.

Campaigners have been fighting for a weight restriction for years, saying HGVs cause vibrations that damage Henley’s roads and historic buildings, disturb residents at unsociable hours and put pedestrians’ lives at risk as well as contributing to the town’s poor air quality.

The ban would mean lorries with no business in Henley would be expected to follow the strategic highway network, including the M40 and A4074 between Oxford and Reading.

The motion agreed by the council will not stop lorries from serving Henley businesses.