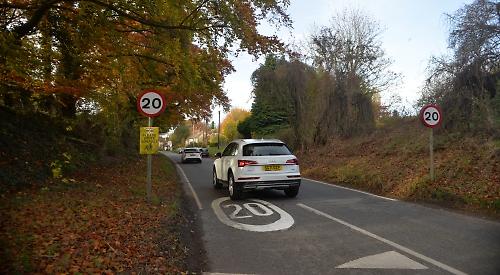 A 20MPH speed limit has been introduced in Cuxham.

Oxfordshire County Council, the highways authority, approved the reduction from 30mph as a trial.

It follows a consultation process in which 82 per cent of respondents were in favour.

The council says the emphasis will be on changing drivers’ mindsets so that breaking the 20mph limit in a built-up area is seen as socially
unacceptable.

The new 20mph zone will initially consist of signs only to see if drivers’ behaviour alone will reduce speeds.

If not, then low-cost traffic-calming measures, such as planters and white posts, to narrow the road will be introduced.

Road markings have also been introduced and vegetation cut back to makethe signs more visible.

A short ribbon-cutting ceremony took place in the village last week as the signs were put in place and was attended by residents and members of the county council.

Cuxham with Easington Parish Meeting has raised concerns about road safety for several years. The village is one of five places in the county to have a speed limit trial as part of a road safety programme.

The council, which is run by a coalition of Liberal Democrat, Green and Labour, has agreed to spend up to £8 million on the scheme and reduce 85 per cent of the county’s 30mph speed limits.

The scheme has been criticised by opposition Conservative councillors, including David Bartholomew who said the new limits would not be enforced by the police so many drivers would continue to ignore them.

Freddie van Mierlo, who represents Cuxham on the county council, said: “I’m very pleased that we have got this in place.

“It’s the start of real change that is going to happen throughout Oxfordshire. It’s a shame that some Conservative councillors are not supporting it and are focusing on the cost rather than on the impact and benefit that this is going to have on the community.”

Councillor Tim Bearder, cabinet member for highways management, said: “We are delighted that this pilot site is now up and running in Cuxham and we are keen to see what impact the measures will have on the area.

“There is considerable local support for the change and we believe it will make this beautiful village even more attractive and safer for pedestrians and cyclists.

“The community has been hugely passionate about getting this change in place.  It was something they wanted and they stood up for it, so it’s great to see them rewarded. This is a scheme that is unique in the country and we think it will bring great change.

“We have received an overwhelming level of interest from towns, villages and parishes since we announced the expansion of these proposals last month, which shows just what an appetite there is for 20mph becoming the new 30mph in Oxfordshire.

“People have said to me that signs alone are not going to make any difference but I say we have to start somewhere and that’s the only way we can produce a cultural change.”

The other pilot schemes are in Long Wittenham, Wallingford Central and Wallingford North and Kirtlington.