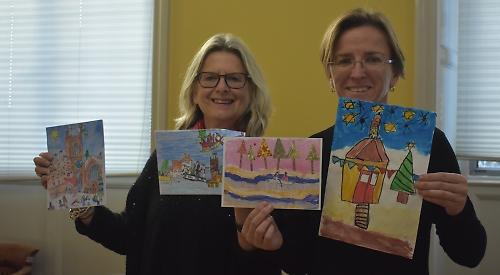 A GIRL has won the Mayor of Henley’s Christmas card competition with a painting of St Mary’s Church.

Alice Vernon, eight, is a pupil at Rupert House School in Bell Street.

Her watercolour of the church in Hart Street was chosen from about 200 entries from children at the town’s primary schools.

It features an angel on top of the spire, a Christmas star and Mary riding a donkey as well as people in hats playing snowballs in the street.

The design will be on the front of the Mayor’s official Christmas card, which is being printed by Higgs Group, publishers of the Henley Standard.

Alice joined her two sisters in entering the competition but said she only did so for a bit of fun. The painting took her a few days to complete.

She said: “I liked the scene of the church. I thought it would look quite interesting and I included the angel and Mary on the donkey because I wanted it to be related to the Christmas story. I’m really pleased to have won, and my parents are very proud.”

Alice was visited by the Mayor Sarah Miller at the independent and awarded a certificate. She will accompany the Mayor in turning on the Christmas tree lights at the Christmas Festival this evening (Friday). Alice has also been invited for afternoon tea with the Mayor and a friend or family member in the mayor’s parlour at the town hall.

She said: “I liked meeting the Mayor and I’m looking forward to turning the lights on with her.”

The Mayor selected the card with the help of her partner Carolyn Ahara.

She said: “I chose it because of the incredible level of detail Alice had included. She kept to the brief and her picture was obviously of Henley, which I really loved.

“The standard of entries was much higher than I thought it would be and it was really difficult to choose one card out of so many beautiful ones. Even the younger children produced some really good cards. It was heart-warming to see all of them.”

Presenting the certificate, Cllr Miller told Alice that her card was fantastic.

She said: “The detail was amazing. Everyone recognised it as Henley immediately. Very well done and sorry to your sisters — maybe next year.”

In second place was Johnny Pratt, six, of St Mary’s School who drew a Christmas scene of Henley with the bridge and Santa flying overhead.

In third was Ailsie Gordon, five, of Valley Road Primary School, who drew a rower on the Thames with Christmas trees in the background.

In fourth was Bea Garbett, who is in year 1 at Valley Road and drew the town hall with a Christmas tree and stars.