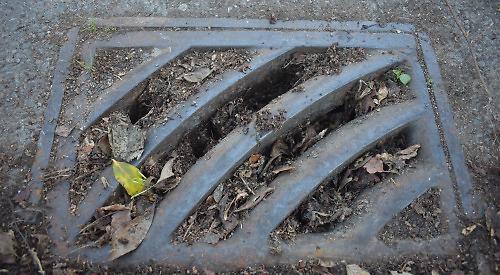 RESIDENTS of a Henley Street are worried about flooding as the drains have become blocked with leaves.

Neighbours in Upton Close say they have been reporting the problem to Oxfordshire County Council, the highways authority, for months but no action has been taken.

The council says it will investigate but that the gullies in the street were cleared in April as part of routine maintenance.

Resident John Grout said: “It’s about time they got on with clearing it. We’re at the lowest point in Henley. When it rains we’ll flood.

“It blocks every year and we report it every year but it’s hard to get through to the county council.

“Luckily, our town council really cares but they don’t have the power to deal with it themselves.”

Near neighbour Tony Robinson said: “I’ve reported it on Fix My Street and they’ve acknowledged it but nothing has been done about it.

“The drains outside John’s house and mine always get blocked. All the muck and rubbish from St Mark’s Road and St Andrew’s Road comes down on to Reading Road and then it all flows down here.

“The drains are there for a purpose and if they’re blocked there will be flooding. We’re a high-risk area because the water can’t go anywhere else once it’s here. We’ve had it up to our front step before.

“I phoned the council and the lady said she could get some sandbags sent here and a sign saying ‘Flood’. She didn’t offer to send someone to clear it.”

On November 22, an anonymous resident reported on Fix My Street seeing a person in an electric wheelchair nearly topple over as the leaves were so dense that they obscured the dropped pavement for disabled access.

Town councillor David Eggleton said: “It’s disgraceful that the drains have not been cleared.

“The drains lead into each other and then to soakaways. If the drains or pipes are blocked, the water will get stuck at each drain. It will flood all around here.

“Floods will cause more problems and the tarmac will be loosened so they’ll have to carry out repair work.

“If they’d gone round with a road sweeper and cleaned up the leaves that would have prevented it.”

He added that other streets, including Greys Road, St Mark’s Road and St Andrew’s Road, also had blocked drains and urged the county council to clear them more regularly.

Town and county councillor Stefan Gawrysiak said: “There is a drainage problem on Upton Close that needs investigating further.

“It’s more than just a drain blockage, there’s a problem with part of the drainage system. It may be a blockage further along the system which needs to be investigated with a camera but it definitely needs remedying.

“I am in the process of hiring a gully cleaning machine paid for by the county council that I will direct around specific areas of Henley for a day or more. There are drains that need clearing in Valley Road, Deanfield Road, Vicarage Road and, I believe, Harpsden Road.”

“Gullies are cleaned in accordance with the council’s maintenance policy and we operate a targeting programme with a higher frequency of cleaning in areas identified as at risk of flooding. The gullies in Upton Close were cleaned in April. A reactive cleanse of the gullies can also be arranged when necessary. When the gully is cleaned it is also checked that it is functioning.

“If the water does not run through, the adjoining pipework is treated with jets. If this does not resolve a blockage, further investigation is undertaken to identify the cause and resolve any issues.

“Drain clearing is done on a four-year cycle, although we do also operate a risk-based system where some locations will be visited on a more frequent basis. We also respond to incidents as required when they are reported to us, such as through Fix My Street.

“Sometimes because of the volume of water that falls, our drains are unable to cope immediately but the water does disperse when the drainage systems that they feed into are able to deal with the excessive volume of water. We will continue to monitor this on our routine inspections.”

He said more investigation was needed into whether the Upton Close drains needed to be cleared as this went beyond the issues with the gullies.

“We have arranged for one of our teams to look into it,” he added.