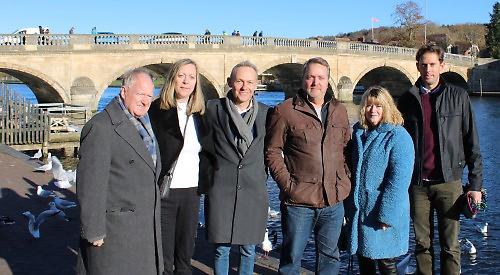 HENLEY Bridge is set to be lit up again.

A small group of business people called Make Henley Shine has drawn up plans to attach 470 LED nodes to the Grade I structure, which was built in 1786.

The energy-efficient, low-voltage lights would be fixed to both sides of the bridge, following the line of the balustrade and each of the five arches.

The plans would have to be approved by both South Oxfordshire District Council and Wokingham Borough Council.

The group, which has applied for charitable status, is to launch a crowdfunding appeal in the new year to raise up to £150,000 to finance the “arts project” for 10 years.

If all goes to plan, the permanent lighting would commence towards the end of next year. The move follows two failed attempts by Henley artist and entrepreneur Clive Hemsley to seek approval for the LED lights he unlawfully glued to the bridge in 2018 before he was ordered to remove them.

Make Henley Shine is chaired by Daniel Bausor, from Bix.

The other five members are Gavin Jackson, an architect, Mr Hemsley, who will look after marketing, Emma Levy, who will help with fund-
raising, Oliver Mahony, who will manage the finances, and Michaela Clarke, who will work on “community engagement”.

He told the Henley Standard: “What we are looking to do is create a beacon, a magnet for residents and visitors, while positively enforcing the relationship between the town and the river.

“No town can rest on its laurels and all towns are having to reinvent themselves and give people a reason to visit and that is what Make Henley Shine is all about. This is an amazing project to revitalise the town.”

He said: “I worked on the river project in London for three years and, like that, this project is about creating that sustainable lighting experience for Henley Bridge all year round. The system that we want to use is the same.

“We have gone through the process of having an ecological and heritage study to assess the impact of the project and we have brought in Gavin Jackson to lead on that.

“There will be 470 individual LED light nodes, which will be warm white in colour and will be in keeping with the town.

“We have listened to what people said when the application was put in last time. People wanted it done sympathetically.

“We have deliberately not put in any additional uplighting of the arches and there are no lights on the river, which would have an impact on the ecology and environment around it. There is no additional light spill.

“We are using the same methodology used in London so there will be few fixings. We are doing this in the right way and we are working with the councils on the project.”

Mr Jackson, who lives in Bell Street Mews, said the lighting scheme would be very different to Mr Hemsley’s.

He said: “The closest thing that the previous art installation was aligned to were Christmas tree lights.

“The ones we propose to use are entirely different. They are high-tech LED discs and you don’t need as many because they perform at a higher standard.

“It will look like a series of dots and will come across a lot more considered and even. We will also have a lot more control over them as we will be able to dim them down.”

Mr Jackson said Make Henley Shine was working with Oxfordshire County Council, which owns the bridge, on the best way of attaching the lights.

He said: “We have no intention of bolting it into the face of the stonework as that is a key element of the bridge’s listed status.

“Instead, the cables and lighting are designed to follow the historical architectural detailing and simply sit along the top of each arch.

“We are liaising with the council so that our method follows their established practice and reduces fixings to a minimum. Over time we hope it develops a conversation about the lighting strategy in the area across the townscape. There is the pub, church and hotel and at the moment there is different colour lighting — some are white and some are yellow. Our ambition is to have a low light level in this area.

“One of the reasons I wanted to be involved is I think Henley only really exists because, historically, somebody crossed the Thames at this point. Without the crossing, Henley wouldn’t be here.

“When you see the promotional imagery of the town, you see the classic grouping of the bridge, pub, church and hotel but at night the bridge disappears. I think it needs to be treated with the respect it deserves and should sit better with that group.”

Mr Bausor said the lights would come on when it got dark and would go off again at about 2am.

The cost of running them would be “minimal” and he hoped the town council would pay it.

Mr Bausor said that the project would provide a boost to the areas surrounding the bridge, such as Red Lion Lawn and Singers Park.

He said: “At the moment the bridge is in total darkness and the idea of the lights is you can see its beauty at night. As part of the London bridge project, they were all in darkness and not safe places to be and now they are lit up and the areas around them have been revitalised.

“They have found that housing and apartments in view of a lit bridge have seen an increase in prices and there has been a reduction in crime in those areas because they are safely lit and people want to spend time there.

“We see this as a 10-year art project and our aim is one of inclusivity and, ultimately, we want to get schools and businesses involved. What it has done in London is open up a conversation about sustainability. It has made businesses think differently about the way they light their buildings.

“London has been a pioneer in terms of how we can light up our cities sustainably and I want Henley to do the same.”

The group has so far raised £30,000 towards its costs and plans to launch funding packages when the crowdfunding website goes live.