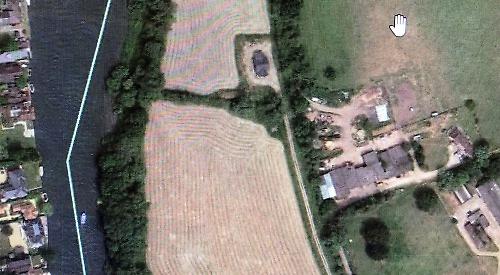 A FARMER has claimed someone is trying to “sabotage” his business.

Simon Marsden, who runs River Farm in Willow Lane, Wargrave, made the claim in a letter to Wokingham Borough Council, the planning authority.

He has applied for planning permission for a new access track that he says would allow the growing of animal feed to be more efficient.

This comes more than two years after he was refused permission to build a storage barn with a 300m access track.

Mr Marsden said the two-storey building would be used to protect boats and equipment as the existing barn was already full of equipment.

He said that boats that were used for maintenance of the riverbank had to be kept out in the open, making them vulnerable to weather damage, theft and vandalism.

But neighbours in Willow Lane objected, saying the black-stained wooden building would be out of keeping with the area.

Charles Bennett said: “The building described is completely inappropriate for an area of outstanding natural beauty.”

Stanley Fosbury said: “The commercialisation of this site will have a considerable impact on the environment.”

Mr Marsden, who bought the farm in 2015, argued the new barn should be allowed under permitted development rights, which effectively grant automatic planning permission for certain types of building, but the council rejected this.

In the letter with his latest application, he says: “The council has been purposely misinformed of the residential occupation of the barn at River Farm. I would like to state it is 100 per cent not being used as a residential unit.

“This is another attempt to stop me from being able to install the correct infrastructure to use the land as I intend. Wasting council time should be a crime.” Mr Marsden, who lives in Wokingham, says he has also had a problem with trespassers and that he had been forced to sell farming equipment that had been vandalised.

He added: “My life savings are in this farm and someone is underhandedly sabotaging my business.”

The application says the track would be used to access land at the northern edge of the farm which becomes very boggy due to its close proximity to the River Thames.

It would extend an existing driveway, winding around the perimeter of the site. It would cover more than one hectare and be made from 50mm gravel on top of 200mm of crushed cement.

Mr Marsden said: “The access track will be essential to our agricultural work.

“We produce silage here and the hay we produce goes to feed the animals at Hurleyford Farm in Hurley where they keep sheep and cattle. Animal feed is so important, especially in the UK, as we import so much of it.

“The northern section is very boggy and we cannot use it unless it is drained. More than 30 years ago this land used to be drained regularly but this ceased.

“Subsequently the river fluctuates in height and has made this package of land very marshy.

“I hope that the additional
infrastructure is permitted so that we can continue with viable arable
production.”

Michael Ruddock, principal planner at the Pegasus Group, says: “The private way will support both agriculture and forestry.

“It will be used to access farmland in the northern part of the farm, the riverbank to the west and the woodland to the north and is essential to ensure good husbandry and proper maintenance of the farm as a whole.

“It is also necessary to enable the farmer to transport his workboat for riverbank maintenance by trailer from the existing barn to the riverbank to ensure that it can be regularly and effectively maintained.

“The amount of land lost from agricultural use will be minimal.”

Public consultation on the application ended on Wednesday.