Campaign to keep out HGVs revived 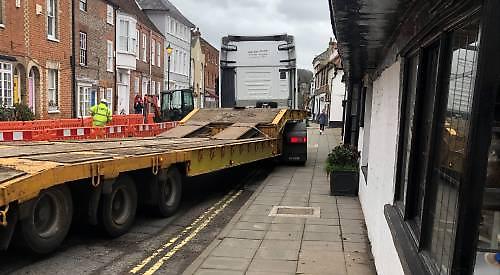 CAMPAIGNERS are to trying to revive plans for a ban on heavy goods vehicles that use Henley as a shortcut.

They want to overturn a decision by Oxfordshire County Council, the highways authority, to revoke a temporary ban on lorries passing through Burford as it was said to be simply moving the problem elsewhere.

The decision effectively scuppered the campaign for a 7.5-tonne weight limit on Henley Bridge.

The council agreed last year to carry out a study on the likely effects of the restriction but has now stopped this after agreeing to create a county-wide network of approved routes for HGVs instead.

Stefan Gawrysiak, who represents Henley on the council, will attempt to
overturn this decision at a scrutiny meeting on Wednesday. Speaking at a meeting of the town council’s transport strategy group on Monday, he said: “Last April, there was a resolution passed at county which actually said that council officers should do all the necessary studies that are required for a traffic regulation order for a weight limit in Henley to come into force.

“Since April, we have had two or three meetings with officers and it looked as though it was progressing very well.

“In November it was agreed that the next step was to create a map around Henley and identify locations for automatic number plate recognition cameras so that we could get an idea of the number and type of HGVs coming into Henley.

“Having got that map, I would have had to go to Henley Town Council to say, ‘Right, here is the map, this is the process and it is going to cost you Z’ and then it would be up to the town council to authorise the funding.”

However, this work came to an end when Duncan Enright, cabinet member for travel and development strategy at the county council, scrapped the Burford scheme.

Cllr Gawrysiak said he planned to ask the scrutiny committee to put this decision on hold and refer the issue to the council’s cabinet.

He said: “What I am trying to do is get that decision overturned so the weight limit for Burford stands. I will be as forceful as I possibly can.

“The second part is this wider freight strategy. The council has announced that it wants to look at the county as a whole and won’t make any decisions on individual towns until that has happened.

“But you will have to do ANPR studies for every town in Oxfordshire, including Henley, because if you are going to come up with a comprehensive freight strategy you have to spend an awful lot of money on the baseline data.

“All the political groups have stated in their manifestos that ‘active travel’ is the buzz word — we want people to cycle and walk to places — so how can that be compatible with thundering great juggernauts going through towns?

“Henley should be allowed to continue with our studies because they will prove that we have a problem.”

Cllr Gawrysiak said he had written to Cllr Enright to complain after he gave his “supposed” reasons for revoking Burford’s lorry ban but there were two flaws in it.

He said: “There was a whole lot of ANPR data that was not included in the decision or the officer’s report. How can you make a decision when all the data hasn’t been considered?

“Cllr Enright represents Witney, which is very close to Burford and there was considerable representation from Witney and surrounding villages in his patch.

“It is our opinion that he should not have made the decision because he had a vested interest.”

Amanda Chumas, of Bell Street, Henley, who has led the campaign for a ban on HGVs, said the county council’s decision raised a number of “disturbing” points.

She said: “A, we’re not going to be able to proceed with the weight limit studies and B, it seems that even if we need a weight limit we can’t have one unless there is a suitable, comparable route.

“The bottom line is HGVs come to Henley purely to cross the river because it is a quick connection between junctions 8 and 9 [of the M40] up to Didcot. Our problems have been exacerbated by the construction of the distribution centres at Didcot and, to a lesser extent, Wallingford.

“We can’t cope with
44-tonners all over our pavements, it is as simple as that and the Department for Transport is on the point of considering authorising 48-tonners, which will be 2m longer and four tonnes heavier. Some sense has to prevail.

“The campaign has been collating pictures from members of the public and sending them on so they can see with their own eyes photographic evidence of these things on the pavements.

“It is totally wrong that the county council should be able to turn a blind eye and say, ‘They have got to go through Henley because it happens to suit us in terms of dealing with the volumes of traffic’.

“Our danger is if we don’t mobilise public opinion and if we don’t let the county council actually know, individuals in Henley, people who care about Henley, not only is Henley not going to get a weight limit, it is also going to find it becomes an authorised HGV route.”

Rotherfield Greys and Shiplake parish councils have both expressed concern that a Henley weight restriction would shift the problem into their villages.

Goring county councillor Kevin Bulmer, who proposed the road network idea, said ad-hoc restrictions in one town or village could be detrimental to others.