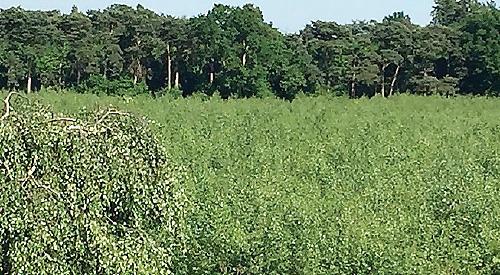 RESIDENTS and parish councillors are objecting to plans for 51 new homes in Woodcote on land not earmarked for development.

Two applications have been submitted to build on sites which were not included in the village’s new draft neighbourhood plan.

The developer argues that the plan did not allocate enough sites for new homes.

The document is currently being considered by an independent examiner on behalf of South Oxfordshire District Council, the planning authority, following public consultation and, if it is approved, will go to a public referendum.

The district council’s own local plan requires Woodcote to find sites for 225 new homes, an increase of 76 on the previous allocation, as it is deemed to be a “larger” village.

However, the parish council said that it could only find room for 129 as Woodcote is in the Chilterns Area of Outstanding Natural Beauty, where major development is only allowed in “exceptional circumstances”.

It argued that the village was being asked to take as many new houses as villages outside the AONB.

The examiner will decide whether to accept this argument and whether the document meets the council’s policies.

Developer T A Fisher, of Theale, has applied for permission to build on the eight-acre site south of Bridle Path, which is currently used for horse grazing and has a paddock, stables and outbuildings.

This is the company’s third such attempt — in 2016 it applied for permission for 65 homes on the land and in 2018 it sought consent for 45. Both applications were rejected by the district council for being major developments in the AONB.

The latest application proposes a single point of vehicular access to Bridle Path, where there is currently access to paddocks.

In a letter to the district council, Richard Barter, the applicant’s land and planning manager, says: “The South Oxfordshire local plan 2035 allocated 15 per cent growth to the larger villages in the district.

“This plan is flawed as it fails to allocate a sufficient number of housing sites in Woodcote and is therefore in conflict with national and local policy.

“This site is considered to be able to help meet this shortfall in housing and meet the identified need for new housing in Woodcote.”

The Wood Lane application has been submitted by the same developer using a different company name, Woodcote Properties.

The site is adjacent to a smallholding which is allocated for nine homes in the neighbourhood plan.

T A Fisher submitted an application for 19 homes across both sites in 2018 but this was rejected.

The company argues that the allocated site isn’t suitable for development on its own.

Malcolm Smith, chairman of Woodcote Parish Council, said: “The parish council is objecting to both applications.

“They’re both sites which were considered for inclusion in the neighbourhood plan and rejected. They’ve both been subject to previous planning applications.

“The neighbourhood plan has now reached examination stage so it will start to be taken into consideration. The developer is using the argument that we’re not allocating enough housing and claiming it has addressed the issues by reducing the number of houses.

“We’re relying on what happens with the neighbourhood plan. If the examiner accepts our argument that will help.”

Neighbours of both sites have also objected.

Richard and Joan Reed, who live in Bridle Path say: “The access road to the proposed development lies opposite our dwelling and will increase hazards to us and our visitors when entering or leaving our property.

“It will have a negative visual and noise impact and overall detrimental effect upon the rightful enjoyment of our property and will add to local congestion.

“The proposed two-storey dwellings are not in keeping with the existing single-storey, well-spaced dwellings which are adjacent to the development.”

Jonny Summers, also of Bridle Path said: “The Bridle Path/Goring Road junction is already notoriously busy and congested with cars often parked on both sides of the road and large buses stopping and trying to get through. Frequent accidents happen here.

“An additional 50 to 100 cars entering and leaving this new development daily would only compound this problem and make this road incredibly dangerous for all local residents.”

Mark Bickerstaffe of West Chiltern, off Goring Road, said: “The site is not in the new neighbourhood plan. As a resident, I strongly object to arrogant developers flagrantly ignoring the wishes of the villagers themselves and applying to develop unsuitable sites on land which is part of an AONB.

“Let’s not forget that Woodcote is a village, not a small town.”

The district council’s air quality officer has requested an air quality assessment be carried out due to the size of the Bridle Path development and sensitivities of the area.

The objections to the proposed Wood Lane development are similar.

A Sanders, of Beech Lane, said: “The site is in the AONB, which is why the village has a carefully thought-out neighbourhood plan for development. This site is not in the plan.

“Directly adjacent to this site is an area that has already been earmarked in the plan for nine dwellings. If you add another 11 to this on the same access road we would end up with 20 extra dwellings all coming out into Wood Lane, a quiet cul-de-sac.”

Brian Forde, also of Beech Lane, said: “The style of the proposed properties, which are to include three-storey town houses, is completely out of keeping with the other houses in the vicinity, which are mostly bungalows, their height creating an eyesore and obstructing views of the small valley.

“It is understood that the area to be developed is home to a wide diversity of plant, animal and insect species, whose existence in this beautiful spot in the Chilterns is clearly threatened by these building works.

The district council is due to make a decision on the applications by April 5.