Pub can keep marquee for another three years 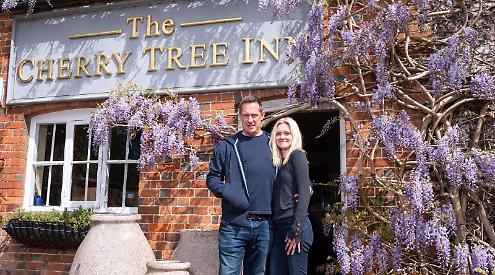 THE landlord of a village pub says he is delighted that he can keep an outdoor marquee despite protests from residents and the parish council.

Dan Redfern, who runs the Cherry Tree Inn in Stoke Row with his wife Natalie, has been granted permission to have the 140sq ft temporary structure for three more years.

He told South Oxfordshire District Council, the planning authority, that he was on the verge of bankruptcy and the marquee was needed to help safeguard the business.

It was installed in September 2020 after the Government said that hospitality venues could have temporary structures to host people outside in line with the coronavirus restrictions.

However, as the pub is a Grade II listed building, the marquee cannot be a permanent fixture, so Mr Redfern sought consent for another three years.

Neighbours and the parish council spoke against the application at a council planning committee meeting last week.

They complained about the size of the marquee, the lack of parking spaces and the potential harm to the conservation area.

He said the Redferns had “openly admitted” to the parish council that they were looking to host wedding receptions as part of their business plan.

The pub had been “trading its socks off” when it was open during the pandemic and there had been “no end of traffic problems” in the village.

Councillor Clayson added: “We believe allowing this marquee to be there for three years is a complete fudge. We either protect the conservation area or we don’t.”

Jeremy Tozer, who lives in Cherry Tree Close next door to the pub, said he was speaking on behalf of his neighbours and other opponents.

He said: “The marquee is more visible from space than the pub is. It is designed for intensification of use. The size, scale, location and materials do not respect the conservation area.

“It’s a big white plastic tent which is almost four times the size of the maximum permitted footprint.

“The town and country planning order permits a smaller structure for 120 days a year and we fully support this. The marquee acts as a sound box, much like the sound box on a guitar, and produces more noise than the open beer garden ever did when it was full so why should young children in the close not be permitted to sleep?”

Mr Redfern, who took over the lease of the pub in April 2018, claimed that 70 per cent of villagers supported him and insisted that the pandemic was not over yet.

He said: “We are in a very difficult financial position. We are close to bankruptcy.

“We lost about 35 per cent of our Christmas trade and every day we receive cancellations due to covid and every day we have requests from people to go into the marquee because they don’t want to be in the pub, which was originally a row of cottages and is poorly ventilated.

“We still have people wearing masks until they sit at a table. The pandemic is not over — I have just recovered from it [covid] myself.

“I do feel the marquee is an integral part of us fighting through covid, which is still very, very relevant. Without that marquee we cannot afford to trade.”

Councillor Lorraine Hillier, who represents the Woodcote and Rotherfield ward, felt the marquee was too big.

She said: “There is significant impact on the character of the listed building and on the village.

“The size of the marquee does detract from the charm of the pub — it is overly dominant and, importantly, there is a loss of important views.”

Councillor Ken Arlett, who represents Henley, called the marquee an “eyesore” and claimed it was contrary to planning policy.

But Councillor Peter Dragonetti (Kidmore End and Whitchurch) said: “We should support successful pubs — we needs successful pubs in this district. They are assets for the communities and our residents.”

The committee decided by four votes to two to approve Mr Redfern’s application.

Speaking after the meeting, Mr Redfern said: “I am over the moon. It has been a really long slog to get to the committee meeting and win approval.

“Being able to have a marquee when people may not want to come to you due to covid fears is essential to our business.

“We have been through hell but the vegetables in the garden are springing up, we have a settled kitchen team, we have permission for the marquee, spring is here and we just need some more sunshine.”