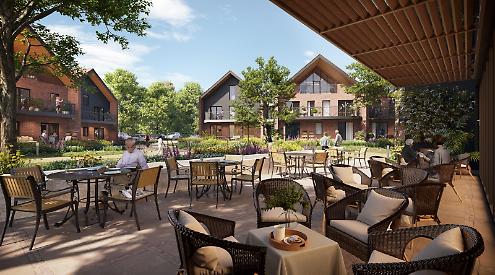 THE developer of a new retirement complex in Shiplake has defended its choice of name.

The £50 million development, which will comprise up to 65 homes with one to three bedrooms, will be called Henley Meadows.

Residents reacted angrily, calling the name “disrespectful” as the complex of “extra care” flats and cottages is not in Henley but will be built on land to the east of Reading Road in the village.

But Jonathan Bloom, head of public affairs, replied that the name choice was designed to support its marketing campaign.

He said: “Traditionally when undertaking a campaign, we will incorporate the name of the closest nationally/internationally recognised place.

“This simply draws attention to the development via traditional media channels and makes for wider domain authority online, effectively meaning Google will prioritise our scheme in its rankings. This is not intended to mislead anyone but to cast a wider net to potential customers.

“In reality, once the site is completed, it will be down to the Post Office to either adopt the name or instruct us to change it.

“As we stand, the name of the scheme helps us sell units and bring a greater number of retired people seeking a care solution to the locality, of which there is a national shortage, which must be good for Shiplake, an attractive location to live populated by people from all walks of life and professions.”

Councillor Bartholomew posted the response on the Shiplake Villages online forum where residents expressed their anger.

Brian Law said: “The last paragraph starting ‘As we stand’ shows that they are totally unaware of the thoughts or requirements of the residents of Shiplake.

“The facilities available to the residents are stretched at present, especially those pertaining to doctors. The increase of residents will make the situation worse.

“How can they say ‘which must be good for Shiplake’ as it appears they have no idea of the problems which will arise?”

Peter Cawthra said: “It will have no connection to Henley, so a bogus fact. We have plenty of old people’s homes in the Henley area not yet fully occupied so why another out of Henley?

“Perhaps they should visit the village in person and hold a meeting in the village hall and hear our views.”

“These do not seem to relate to their ‘closest nationally/internationally recognised place’.”

The blocks of flats will be two-and-a-half storeys with six flats on each level while the homes will have balconies, terraces or private gardens complete with gables and timber cladding.

There will be a clubhouse in the middle of the development with a bistro, bar, gym and fitness suite and care services for the elderly residents.

Construction will begin this month with sales commencing in July.

The plans were first rejected by the district council in 2017, which said the development would urbanise the countryside and erode the “green gap” between Shiplake Cross and Lower Shiplake.

The company revived its plans in October 2018, saying the development without the care home would have less of an impact.

The district council rejected the application again but a planning inspector overturned the decision.