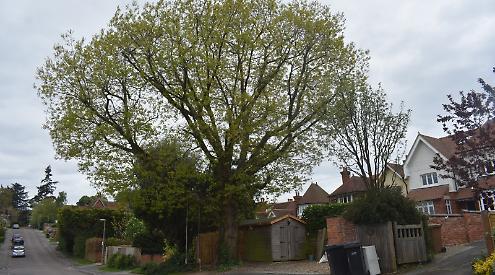 AN old oak tree in Henley has been temporarily saved from the axe.

The 150-year-old tree, which is in a private garden in Western Road, was due to be cut down on Wednesday morning with owners citing the cost of pruning the branches.

But this was postponed when South Oxfordshire District Council intervened after being alerted by another resident.

He said: “I remember walking past that tree when I was seven years old. It has been a part of my life for 40 years. We think it is around 150 years old, so it has lived through the Industrial Revolution and two world wars. We only found out the day before that the tree was going to be felled. The neighbours cite the costs of pollarding as the reason.

“I got in contact with the district council as soon as I found out. They managed to stop the felling but who knows for how long. We haven’t saved it forever.

“If the tree was in poor health, or causing a hazard to residents, then I would completely understand the decision but it is neither of those things.

“We are talking about a tree that was planted before any of us were alive and, if it is not felled, will be here long after we are dead. I’ve been in contact with the town, district and county council, as well as others on the street, and everyone I’ve spoken to is against the felling. It is such a big and beautiful tree.”

The district council placed a temporary preservation order on the tree.