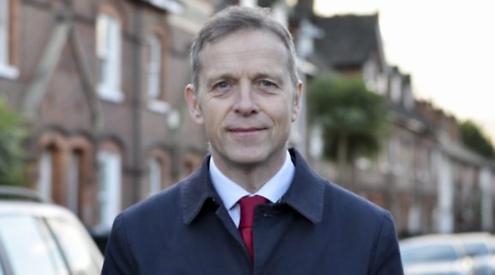 Beechcroft Developments, of Wallingford, bought the former BBC site in June last year and submitted a planning application for 153 homes and a care home at the 93-acre estate.

Another 41 houses and 12 flats would be built to the east, where there is currently a car park. The sports pavilion would be extended and refurbished to include two new croquet lawns, two bowling greens and an additional tennis court.

The developer, which specialises in both retirement communities and property conversions, says there would be a “walking trail” around the perimeter of the site accessible to residents and the public.

Mr Rodda says he is not against redevelopment of the site in principle but believes the application includes too much development and wants Beechcroft to reconsider its plans.

In a letter to Reading Borough Council, he says: “I hope it will be possible for the borough council and residents to work with the developer and I want to encourage a sensible discussion about public access to the parkland and sports facilities on the site. Caversham Park House is an important historic building, which needs to be protected, and I am pleased that the Grade II listing is recognised by the developer.

“I am opposed to large amounts of new building at the site. The related issue of access, traffic and congestion is also a real concern to me and the local community.

“Peppard Road is already very busy and the section near the Hill School is congested, particularly at the start and finish of the school day.

“There is a bend in this section of road and no pavement on one side. I am concerned about road safety and the effect of pollution and congestion on residents and on the environment.”

As well as preserving the exterior, Mr Rodda calls for features inside the house such as the dining room and chapel to be protected. He suggests a small museum could be included to recognise the work of the BBC.

Campaign group Keep Emmer Green has opposed the plans, saying the site is too close to the former Reading Golf Club course, where plans for 223 new homes were approved in March.

The council’s local plan says conversion of the main house may be acceptable if it sustains the significance of the building.

Beechcroft says its plans mean that public access to the parkland will be available for the first time in generations.

Managing director Chris Thompson said: “Caversham Park is mainly registered parkland and we respect this special designation. The built area will extend to just seven acres, or just 7.5 per cent of the whole site.

“More than 69 per cent of those submitting a feedback form at the public consultation expressed support. We have listened to the public’s views and have amended our original proposals as a result. Beechcroft sees itself as the custodian of one of the most architecturally attractive buildings within Reading and the glorious parkland.

“This is one of the most exciting planning proposals seen in the borough for many years as it addresses some of the real issues facing Reading. There is a severe shortage of older persons’ housing, affordable housing and publicly accessible open space.”

The house was built in 1850 by architect Horace Jones, who was inspired by Italian baroque palaces and later went on to design Tower Bridge.

It was constructed in a neo-Georgian style, illustrating the continued trend for classical design during the mid-19th century.

During the First World War part of it was used as a convalescent home for wounded soldiers. In 1923, the Oratory School bought the house and about 300 acres of the estate’s remaining 1,800 acres.

The Oratory relocated to Woodcote and with the onset of the Second World War the Ministry of Health requisitioned Caversham Park, initially intending to convert it into a hospital.

However, the BBC bought it and moved its monitoring services there in 1943 and stayed until late 2017 when the site was sold.