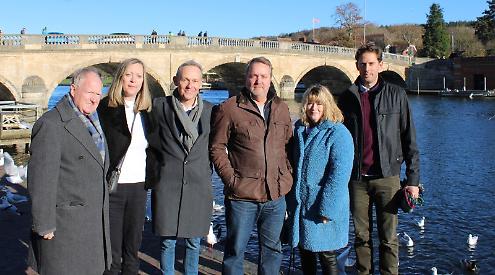 PLANS to illuminate Henley Bridge have won the support of both Leander Club and Phyllis Court Club.

The riverside clubs have signed up as “headline sponsors” of the 10-year “arts project” together with law firm Blandy & Blandy, which has an office in Thames Side.

Make Henley Shine, a small group of business people, wants to put 460 LED lights on the Grade I listed bridge, which it says would help the town bounce back following the coronavirus pandemic.

It also thinks illuminating the bridge, which dates back to 1786, would encourage people to spend more time by the river as well as making the area safer.

The group, which unveilved its plans in December, now has about £35,000 towards the total cost of the scheme, which is thought to be about £150,000.

It hopes to obtain charitable status by the autumn.

Daniel Bausor, from Bix, who chairs the group, encouraged other businesses and organisations to support the campaign.

He said: “We are non-profit, so achieving charitable status is critical and we can get Gift Aid.

“Blandy & Blandy are helping us through that process now they are on board.

“We want to have other organisations and individuals in the area who are passionate about the project.

“In the past few months we have done a lot of due diligence work and we have evolved the environmental and heritage reports which are close to being finalised and will form part of the planning application.

“As part of this, our architect Gavin Jackson has done an inspection with an installer to look at how we can accentuate and enhance the architectural features of the bridge. That’s why there are now 10 fewer lights than we had previously planned.

“We have also been approaching numerous organisations and individuals so responses are now coming to fruition but there is still a long way to go.

“We want to make sure that we do this in the right way and that the proper planning process is followed.

“If anyone wants to get involved to make this a reality we would urge them to get in touch because we need support from everyone.

“This will be the first sustainably-lit bridge outside London and this will be another opportunity for Henley to make its mark.”

The sponsors all made “substantial” donations to the project and will have their logos and names on a plaque at each end of the bridge but not attached to it.

Alastair Heathcote, general manager of Leander Club, said: “Henley’s riverside is a jewel in our town and has so much potential to enrich the lives of our community as well as visitors. Make Henley Shine is a visionary project to do exactly that and create a wonderful experience for people living in Henley and visitors to enjoy.”

Nick Burrows, partner and chairman of Blandy & Blandy, said: “We are delighted to be working with the Make Henley Shine team and to be supporting this landmark project, including advising on the formation of the charity.

“Henley Bridge dates back to the late 18th century and nearly as far as our own history in the town.

“We look forward to seeing residents and visitors hopefully enjoying the illuminations in the years to come.”

Chris Hogan, chief executive of Phyllis Court Club, said: “Enjoying the view of Henley Bridge from Phyllis Court is fundamental to the life and fabric of the club.

“This initiative to focus the viewer on such an iconic part of Henley town can only be applauded and will enhance hugely the reputation, image and ambience of Henley to residents and visitors alike.

“I have no doubt that the 3,500 members and their guests will be thrilled at the prospect of this great visual enhancement.”

Mr Bausor, whose wife Jo is chief executive of the Henley Festival, said: “We are honoured to receive the sponsorship and financial support from Leander, Phyllis Court and Blandy & Blandy, who share our vision on this exciting community arts project to illuminate Henley Bridge sustainably. We are looking for further donations to make this wonderful light installation a reality and welcome other public and private organisations and individuals to be part of it.”

Mr Bausor said that once Make Henley Shine had received charitable status it would work with a range of stakeholders, residents, schools, communities and special interest groups to develop a broad programme of public events and activities for people of all ages around the river.

He is also supporting the illuminated boat parade being organised by Chris Taylor which will be staged for the first time in Henley on Saturday, September 24.

Mr Bausor said: “I wholeheartedly support the illuminated riverboat project because, like our project, I would want to encourage people to enjoy themselves around the bridge.”

Last month, the Henley Standard reported that a vandal had spray-painted a large letter “H” on to the Remenham side of the bridge and Mr Bausor thinks illuminating the bridge could improve security.

He said: “I can’t say that things such as graffiti will end full stop but it could be a solution. Illuminating the space there would mean more people will be around so the opportunity for the minority of people who want to spoil the bridge would no longer be as viable an option. In London that is what has been found.”

A planning application is expected to be submitted in the summer.