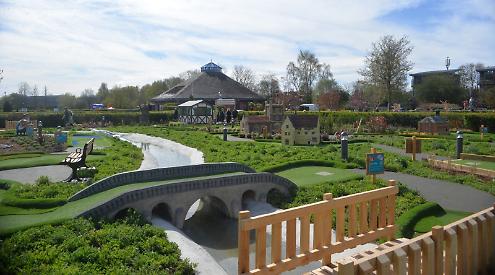 HENLEY’s new adventure golf course made about £30,000 in its first few weeks.

The course in Mill Meadows, which features large models of local landmarks, including the town hall, Kenton Theatre and Henley Bridge, opened in mid-April, replacing the old putting green.

Town clerk Sheridan Jacklin-Edward said visitor numbers were strong. He said: “We have seen that it does dip during the week and then peaks at the weekend and bank holidays.

“What we’re hoping is, as the tourist season really gets into full flow, we will see more flattening out so use during the week should increase, especially during the school holidays.

“It’s certainly looking way above predictions at the moment but it is early days. There are still some teething issues that need to be sorted out.”

Mr Jacklin-Edward said the golf course had meant that repair work to the riverbank in Mill and Marsh Meadows had been put on hold but this would now be treated as a priority.