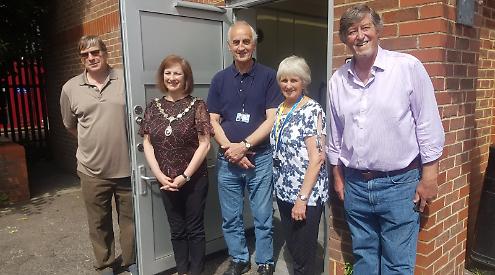 THE refurbished public toilets in Greys Road car park in Henley have been officially opened.

Mayor Michelle Thomas and other councillors attended Friday’s event following a three-month makeover of the facilities.

The £145,000 project by South Oxfordshire District Council involved redesigning the building to create two separate unisex lavatories, one of which has a baby changing table, and one for women only.

There is also a “Space to Change” facility, which is specially designed for wheelchair access and includes a height-adjustable changing bench and hoist. A RADAR key is needed to enter.

This is in addition to a new welfare room for the car park inspectors and a storage room for equipment such as signs and barriers for use in the car park. Stefan Gawrysiak and Ken Arlett, who represent Henley on the council, had campaigned for the refurbishment.

Cllr Gawrysiak said: “Ken and I have worked on this particular project for about five years to try and get it done. It took a long time.

“The toilets were old and smelly. I used to come along and do the sniff test and it was appalling. Now you stick your nose in and it’s really nice. They are nice to use, they are clean and tidy and they are modern.”

Councillor Sue Cooper, cabinet minister for environment, climate change and nature recovery, said: “I am so pleased to see these toilets.”

The toilets, which opened for use last month, can track how many people use them.