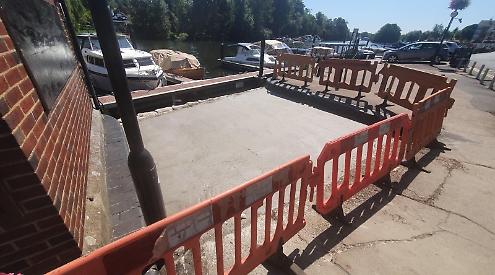 TWO civic organisations have joined forces to try to obtain public access to the River Thames at the Friday Street slipway in Henley.

The Henley Society and the River Thames Society want to pressure the Environment Agency into resolving a longstanding dispute with Sorbon Estates, which is blocking access to the river with a pontoon.

They have enlisted the help of Henley MP John Howell, chairman of Parliament’s all-party committee responsible for the River Thames.

He has written to agency chief executive Sir James Bevan twice, calling on him to take action.

Sorbon, which owns property adjacent to the slipway, filled it in with concrete without permission in summer 2020 to create two parking spaces.

In December Henley Town Council had the slipway reinstated after failing to get the company to carry out the work and sent it the bill, understood to be about £6,000. But access to the river remains blocked by the pontoon.

In a joint statement, Henley Society chairman Geoff Luckett and Tom Berman, his opposite number at the River Thames Society, said: “The Environment Agency have all the necessary information to this straightforward obstruction of a public access and all the necessary powers to put it right, yet their continual excuses, which they have been making for some 12 months about ‘short staffing and competing activities’ is wearing just a little bit thin.

“If this obstruction is not cleared soon we will go through another summer when Henley residents and visitors cannot access the river at this convenient point. It really is time that the agency managers got to grips with this situation.”

Sorbon Estates has said that filling in the slipway was “improvement and maintenance work” but admitted failing to consult its planning consultants so the issue of obtaining consent was “overlooked”.

It says the pontoon was installed with permission and a licence from the Environment Agnecy and planning consent from South Oxfordshire District Council.